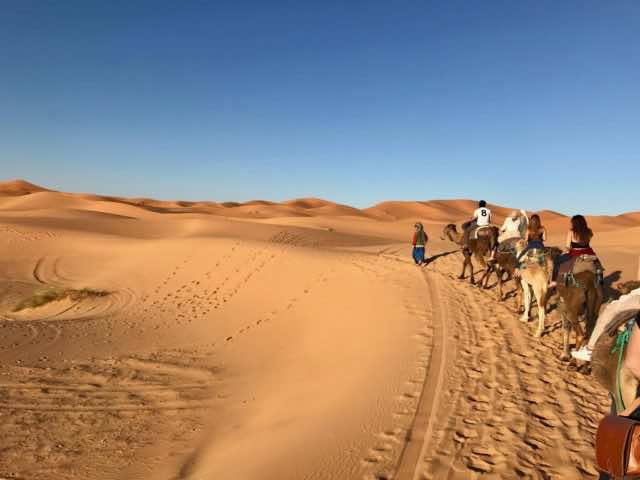 Rabat – From the Atlantic’s rocky break, across plains, woodlands and the Atlas Mountains’ imposing peaks, lays the Sahara.

Despite our early start, the sun was setting by the time we caught our first glimpse of desert. Snaking mountain roads turned into straight, dusty highways and eventually everything was burnt red; the early evening sky, the road ahead, and the rocky plateaus (or Hamadas) beside us.

Just as the settling darkness amplified our isolation, we spotted the hotel; a hump along a stretching horizon. Once inside, it’s shaded pools, canopied-sunbeds, and potted plants gave us the impression we had stumbled upon an oasis.

The next morning, headscarves, water bottles and cameras in hand, we ventured into one of the Sahara’s great Regs (expanses of loose rock and gravel that make up most of the desert). We first visited Arishidia, a village whose sand-colored buildings looked as though they had been formed and rounded naturally by centuries of wind.

After ducking into a cheerful classroom packed with wide-eyed first-graders, we escaped the quickly rising sun to watch a performance of Gnawa music. The folk style, developed by slaves from modern-day Senegal, is a form of ancient rhythmic poetry. It captured the group fully; as six men in long white robes sang and danced the tradition, we sunk back into the room’s cushioned corners and watched in silence.

On our way out of Arishidia, we swapped our tourist van for 4×4 Jeeps, and headed into the Sahara’s acclaimed Ergs (shifting sand dunes) with full force. 20 minutes into the trek, we stopped to explore an out-of-use colonial mine, where desert-natives worked under the threat of a French-run prison still looming in the distance.

Several stops (and photo-sessions) later, we arrived at our second accommodation; a sandcastle-like building marked at the entrance by a family of clay, life-size camels. From there we prepared for our trip’s climax; the Saharan sunset.

With surprisingly little trepidation, our group mounted 25 one-hump camels, and sauntered into the golden mass that lay behind our hotel. The guides were accustomed to wide-mouthed tourists; leading groups of 4 by well-worn rope, they looked outward into the sinking sun. The curious animals beneath us also seemed uninterested; we questioned whether it was possible for anyone, even an animal born of the region, to walk the dunes without wonder.

After dismounting atop a bank as the sun sank in a cloudless sky, we climbed, and rolled and snapped as many photos as we could. Despite the group’s number, and the setting’s novelty, the dunes felt peaceful; maybe only the Sahara dessert, in its immense size and silence, could drown out the voices of 25 American tourists.

We ventured back out that night for stargazing, and again in the morning for sunrise. Under a bright moon, and cover of stars we attempted to guess constellations. Eight hours later, we huddled together atop a cool mount of leveled sand and waited for the sun to reappear. Once it signaled, we retreated for a groggy breakfast and boarded a bus for a long ride home. While the spell mostly lifted as the environments changed outside our windows, we all felt a bit smaller; aware of a new vastness and our significance relative to it. 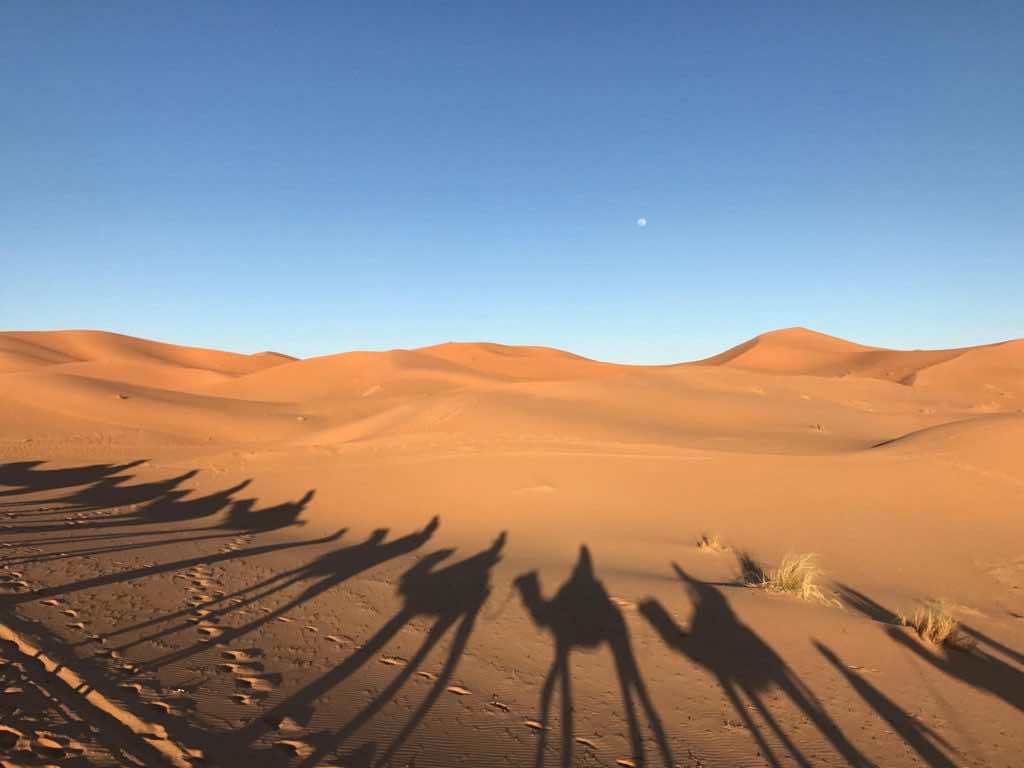 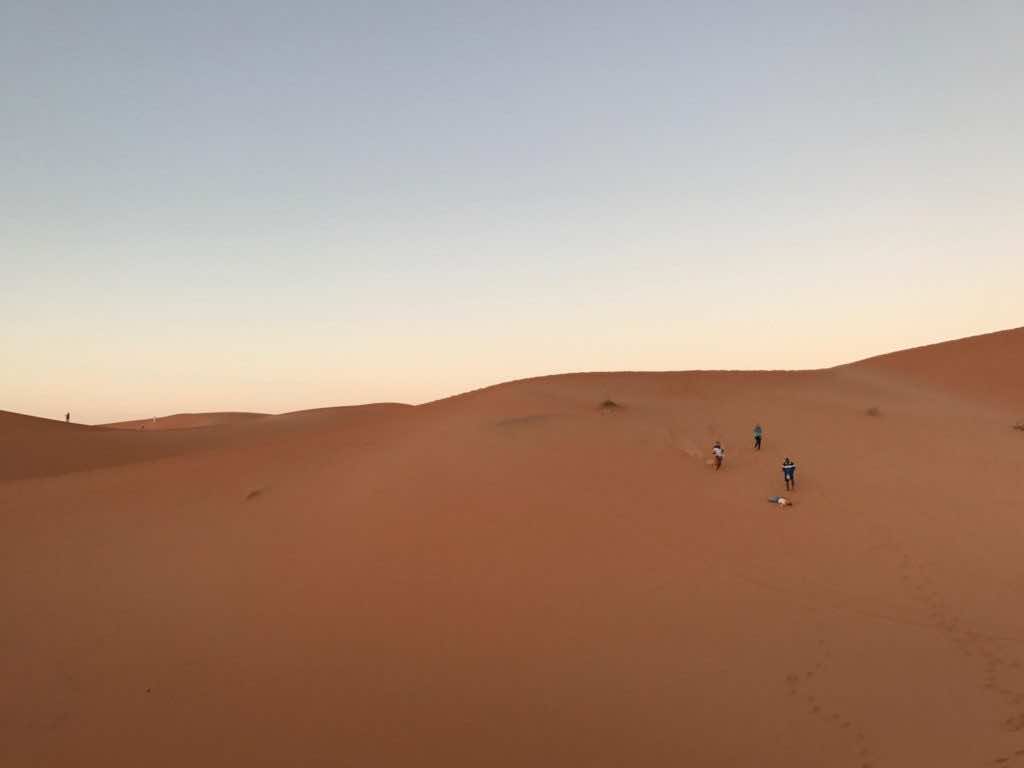 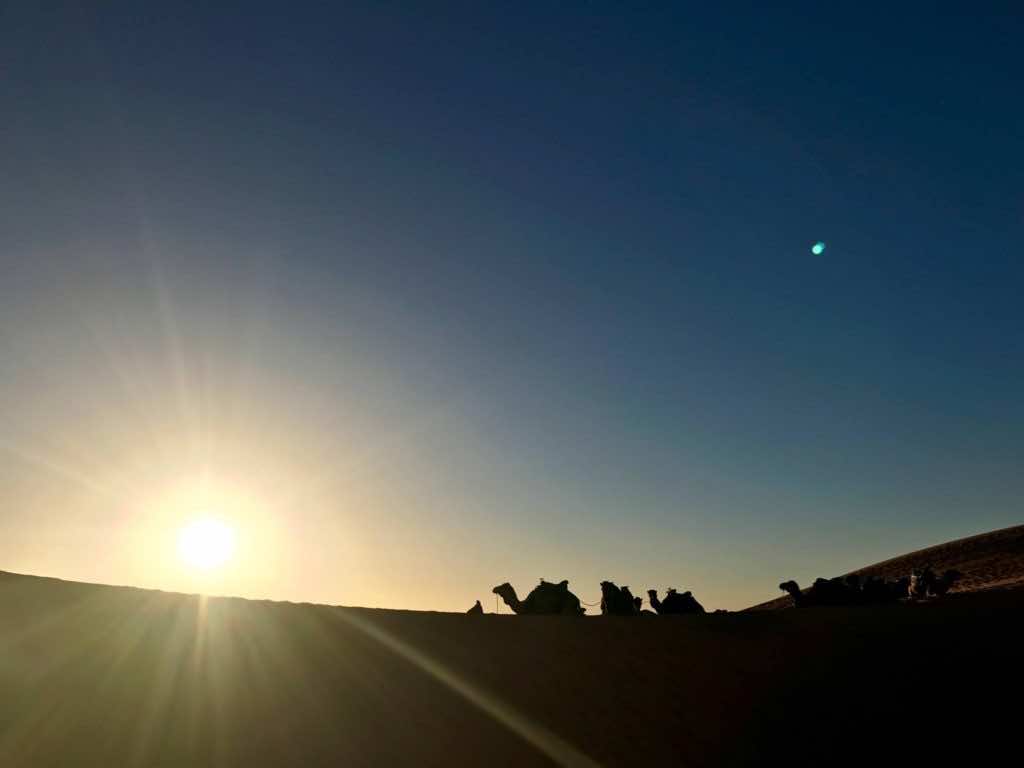 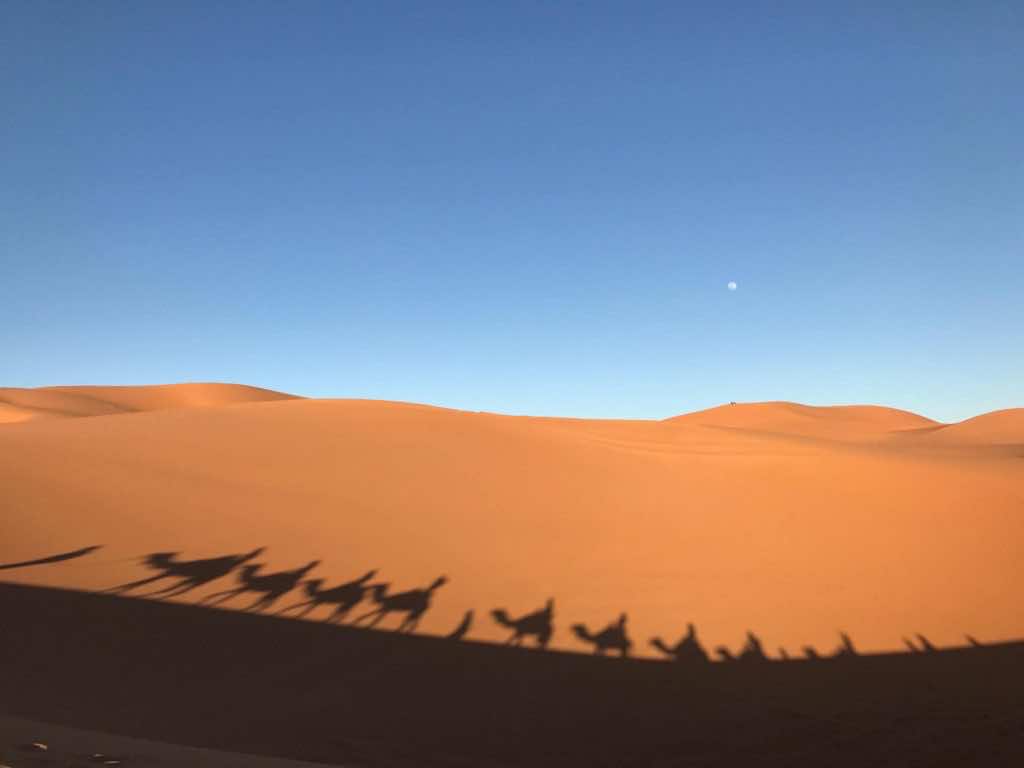 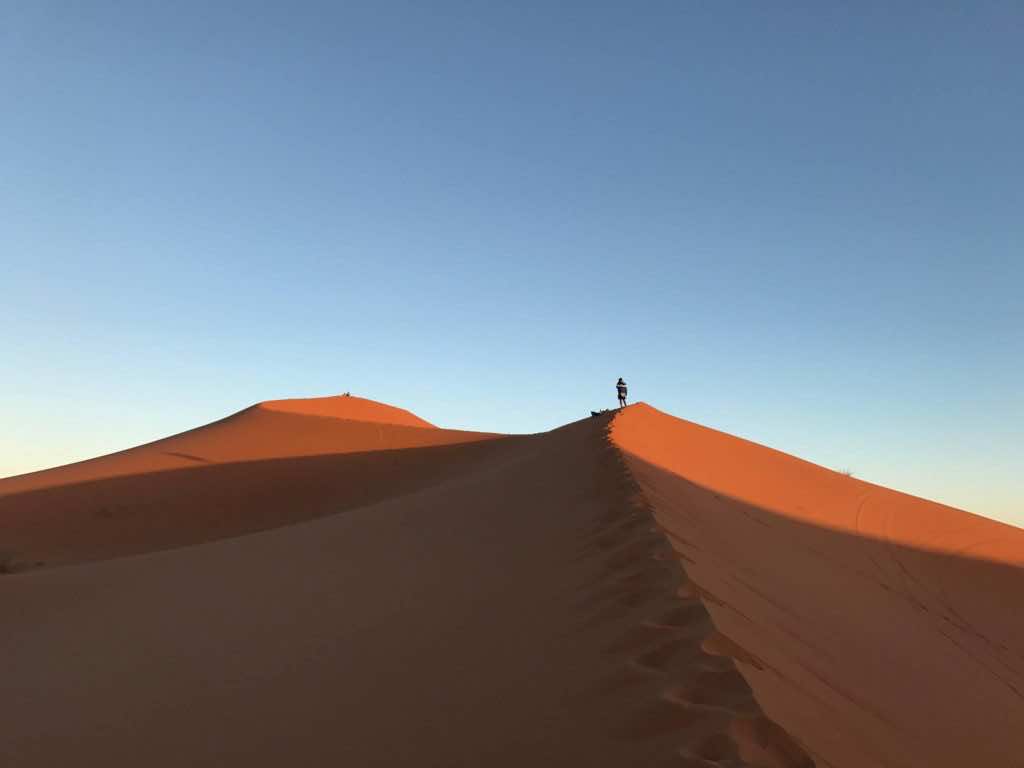 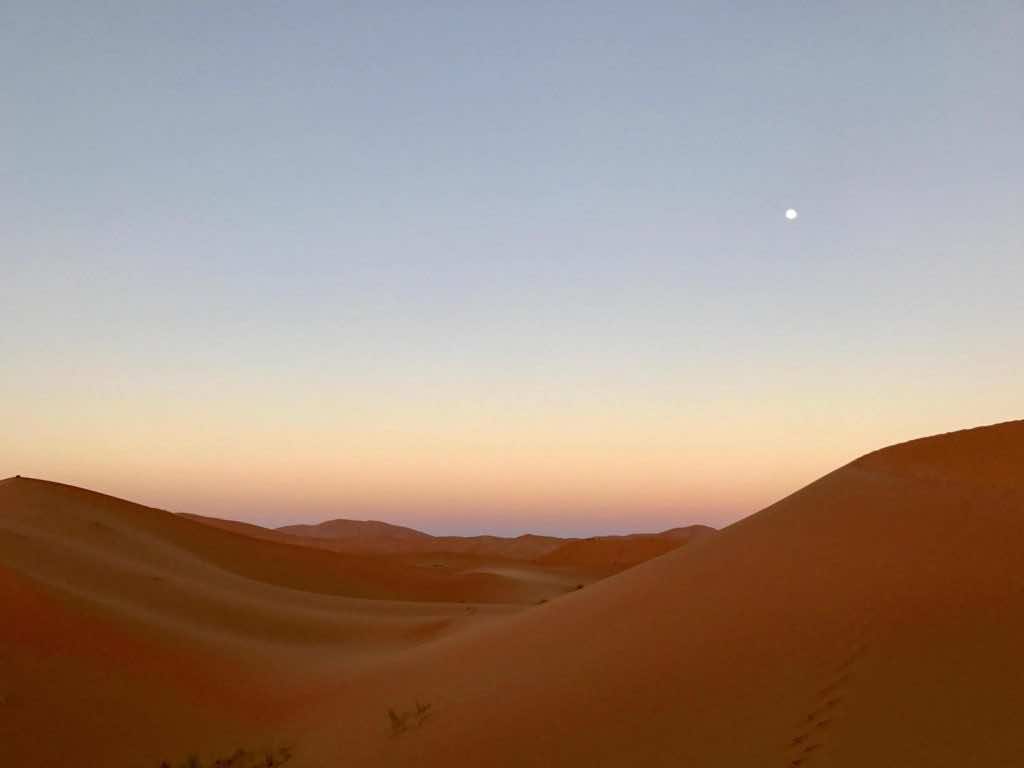 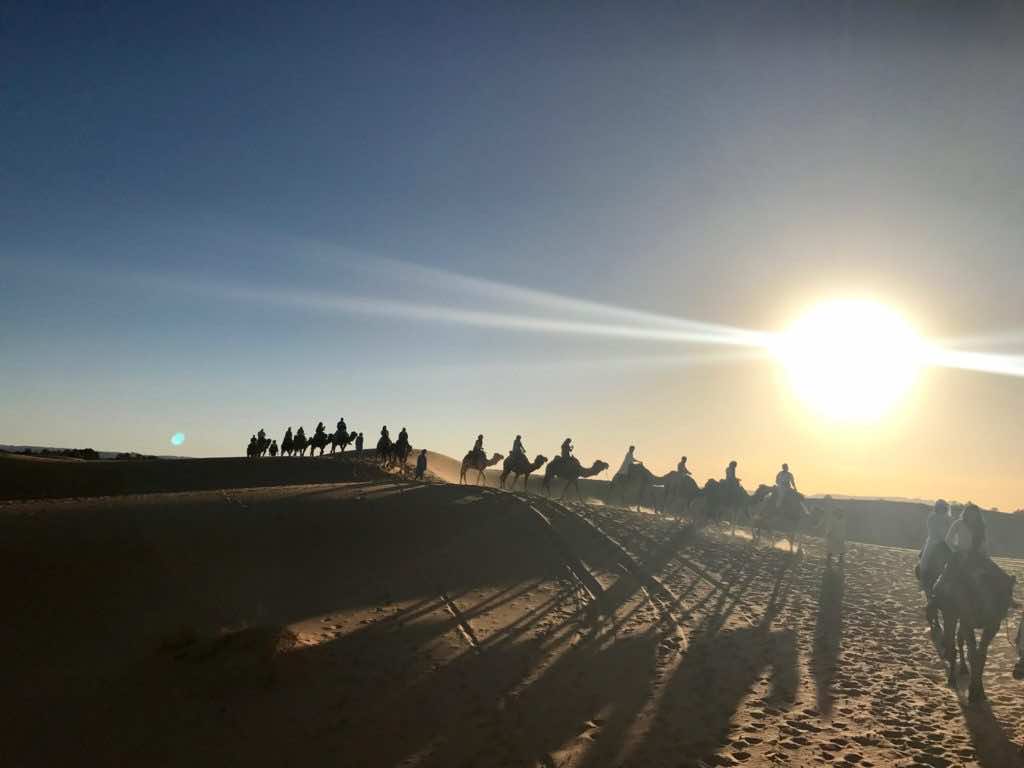