Rabat - British PM Theresa May was asked by MP Michael Tomlinson if she thought it was wrong to label Wednesday’s attack Islamic Terrorism. May surprised more than a few people by agreeing with the MP.

By
Constance Renton
-
Constance graduated from the Television and Radio Broadcasting Program at Canadore College in 1983.
Mar 24, 2017
Spread the love

Rabat – British PM Theresa May was asked by MP Michael Tomlinson if she thought it was wrong to label Wednesday’s attack Islamic Terrorism. May surprised more than a few people by agreeing with the MP.

May’s response caught a few people off guard. “I absolutely agree,” May said in the House. “And it is wrong to describe this as ‘Islamic Terrorism.’” Instead, May clarified, “It is ‘Islamist terrorism’; It is a perversion of a great religion.”

Four people were killed and forty injured when a man went on a rampage Wednesday, outside the British House of Parliament in London. Khalid Masood, 52, used a rented SUV to mow down scores of pedestrians walking along Westminster Bridge, including a group of schoolchildren from France.

Masood then exited the vehicle and attempted to gain entry to Parliament. He was stopped by two officers, one of whom he fatally stabbed, before moving on. He was confronted by two more officers approximately 20 yards from Parliament before being shot and killed.

The suspect was known to police to be have been “inspired by international terrorism” but only as what May called a “peripheral figure.” His name had come up at one point during an MI5 investigation but no further details have yet been released. Masood is confirmed to have been born in Kent.

May’s statement calling the incident a “perversion” is a clear contradiction of her Minister. Earlier Thursday, Defence Secretary, Michael Fallon made the following statement; “It was no accident that this attack was on Westminster, because it is at Westminster that we debate differences, very sharp differences, very freely and respectfully between us, and this kind of Islamic terrorism doesn’t respect those differences, so it is no accident that there was an attack here.”

Twenty-nine people remain in hospital following the attack. Seven are in critical condition. 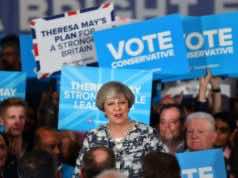