Rabat - In an attempt to rally support, the accused in the case of Gdim Izik and their defense team made a dramatic claim that they are being denied their rights. 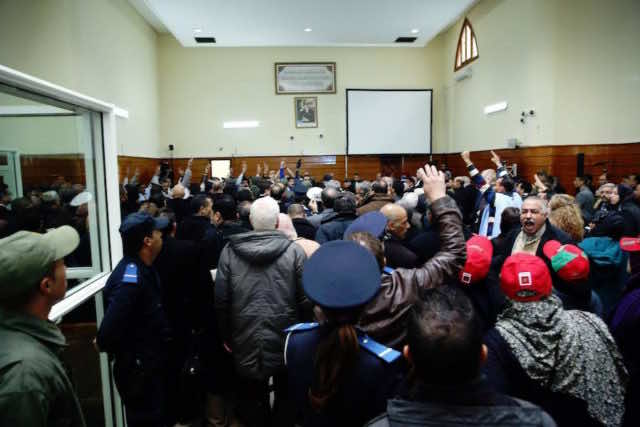 Rabat – In an attempt to rally support, the accused in the case of Gdim Izik and their defense team made a dramatic claim that they are being denied their rights.

When the trial of the Gdim Izik case resumed on March 28 it was characterized by a disrespect display toward the court and the law on the part of the accused. They and their team of lawyers attempted to muddle the case using different methods, refusing to abide by the court’s law.

The accused in the case of Gdim Izik disregarded the Moroccan judicial framework by remaining silent when asked to speak and speaking when they were not allowed to. In the judicial system in Morocco, silence is legal but not refusing to answer questions.

The families of the Gdim Izik victims, who came together and constituted a civil party, made their case in Thursday’s prosecution about the defense inability to contain the situation.

The case was closed four years ago when it was heard in a military tribunal, which found the accused guilty. After the constitutional reform of 2015, prohibiting citizens from being tried in military tribunals, the case had to be reopened in a civil court. The court also decided to postpone the proceedings until May 8th to weigh the contents of medical reports concerning 16 of the 21 accused.

This did not stop the accused from uttering politically provocative statements, refusing to cooperate and completely disregarding the court’s operational framework.

For the civil parties, constituting the families of those injured or killed, the unnecessary drama constitutes an ordeal entire ordeal to be endured. They would prefer to proceed with the case without the provocative attitude and politically charged comments of the accused.

The incidents of Gdim Izik date back to October and November 2010, during the dismantling of the camp that resulted in deaths, injuries and destruction. 11 law enforcement officers, including an officer of Civil Protection, died and their dead bodies were desecrated. 70 other individuals were injured, mostly law enforcement officers and 4 civilians. Also, private and public property suffered enormous material damage.