Toronto - More than one thousand protesters from the If Not Now movement showed up to bedevil the 2017 annual AIPAC conference in Washington DC on Sunday. 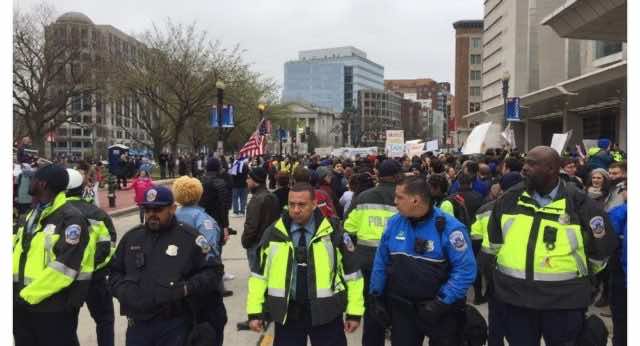 By
Constance Renton
-
Constance graduated from the Television and Radio Broadcasting Program at Canadore College in 1983.
Mar 28, 2017
Spread the love

Toronto – More than one thousand protesters from the If Not Now movement showed up to bedevil the 2017 annual AIPAC conference in Washington DC on Sunday.

Back in February, the “If Not Now” movement promised it had something big planned for the annual March AIPAC conference in Washington DC. More than a thousand protesters showed up in front of the conference hall on Sunday, determined to disrupt the proceedings.

Some carried signs while others lowered banners and chanted slogans in support of ending the Israeli occupation of Palestinian-held territory. “If Not Now” is an organization comprised of young Jewish Americans, diametrically opposed to Israeli settlements in the West Bank.

Calling it the “Reclaim, Resist and Reimagine” rally, the protesters posted videos and photos on Twitter under the hashtags #ResistAIPAC and #JewishResistance. It is the first time such a protest has been staged at the annual policy conference. A few protesters managed to find their way inside the hall and were able to lower a banner protesting the occupation.

This year marks the occupation’s 50th year and, for the protesters, it’s been fifty years too long. “Fifty years is too long. It’s a moral crisis for the Palestinians, it’s eroding our community. AIPAC does not speak for American Jews,” one protester claimed.

Covering the event live, Al Jazeera posted a video of the protesters as they blocked the entrance and chained themselves to the doors. The following is a collection of the most memorable quotes:

“We are the Jewish resistance.”

“We refuse as Jews and humans to be part of the American Jewish establishment… I feel heartbroken that it’s taken our community so much to move… We have a long way to go.”

Clashes broke out at one point, following the arrival of members of the Jewish Defense League but by then the protesters had made their point. As activist and author, Dr. Cornel West said, “We come from a very rich and deep prophetic tradition that goes back to Amos and Jeremiah and Esther.

It goes back to Rabbi Abraham Joshua Heschel, Albert Einstein and Muriel Rukeyser and so many others. And so, we tell some of our more conservative brothers and sisters on the inside that you do no represent the best of the Jewish prophetic tradition, and we’re here to bear witness.”

Back in February, “If Not Now” targeted a new Israeli law that made it legal, by Israeli standards, to build on land privately owned by Palestinians. The move prompted “If Not Now” leader, Sarah Lerman-Sinkoff to issue the following statement; “We know that 50 years of pro-Israel-at-any-cost politics enforced by the American Jewish establishment made this brazenly unjust law possible. It’s time for a change of leadership in the American Jewish community.”