Rabat - A rare diamond known as the Pink Star has been sold in Hong Kong for more than $71m, setting a new world record for any gemstone at auction. 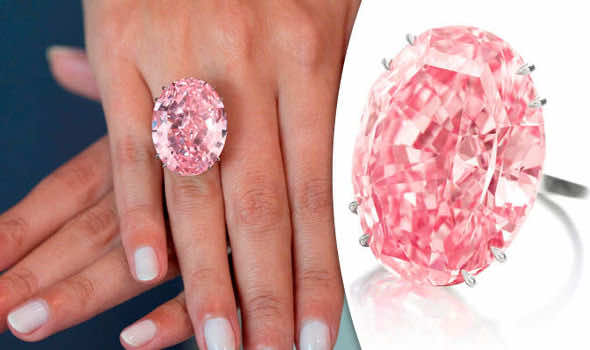 Rabat – A rare diamond known as the Pink Star has been sold in Hong Kong for more than $71m, setting a new world record for any gemstone at auction.

The oval-shaped, 59.6 carat stone was bought after a quick flurry of bidding at Sotheby’s auction house, reports said. It is the largest Internally Flawless Fancy Vivid Pink diamond ever graded by the Gemological Institute of America.

The bidding was fast but furious, lasting a mere five minutes. All three potential buyers involved conducted their bids by telephone. Sotheby’s Asia Chairwoman, Patti Wong, described the bidding frenzy. “We’re very happy. I know there was a lot of talk about the economy in China not being as positive as it was a few years ago.” She concluded by saying the results of Tuesday’s complete jewellery auction were very strong.

Prior to the sale, David Bennett, worldwide chairman of Sotheby’s Jewelry Division, had this to say about the rare bauble; “The extraordinary size of this 59.60-carat diamond, paired with its richness of colour, surpasses any known pink diamond recorded in history.”

Bennett also explained Sotheby’s decision to put the gem back on the auction block. “The Asian element in the jewellery market is extremely important and from what I’ve been hearing from members of the trade I’ve been talking to, in the last six months they have become more and more important.”

It is the second time in less than four years the Pink Star has been appeared at auction. In 2013, Sotheby’s sold it for $83.2 million to a bidder in Geneva. The price was a record but the buyer and his investors defaulted on the payment and it was returned to the auction house.