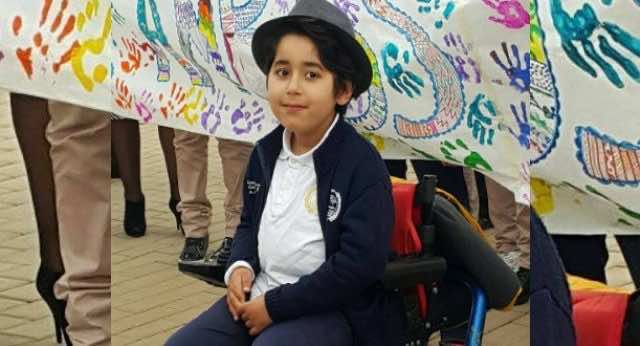 Rabat – April 2, 2017 was certainly an unforgettable moment for Omar Archane, an 11-year-old boy suffering from Muscular Distrophy who brought home the top Moroccan web award: The Person of the Year.

For two months Omar campaigned across a wide range of public to vote for him ahead the Morocco Web Awards ceremony which was held at the Studio of Living Arts, in Casablanca.

He received the award for his series of culinary videos, broadcast over his social media accounts. In the videos, the young-cook instructs his followers with easy homemade recipes on his YouTube channel and Facebook page. He’s been broadcasting for a couple of years now.

At the age of 8, Chef Omar’s mother proudly filmed her son while he busily created an easy-to-prepare dish. She posted his first video on Facebook after convincing him to share his culinary expertise with the public. That is when his culinary adventure began. Thousands of online users are now following this young culinary star. Chef Omar has more than 75,000 likes on his Facebook page and 4,953 subscribers on his YouTube Channel.

“I am different as you”

For his part, young optimistic chef Omar has attempted to convey inspiring messages in different languages, delivered in English, French and Arabic via his videos. One of the most touching messages he recorded was posted on August 8, 2016 and has received 4,958-views. “I always have to be positive and keep a smile, even if my disability stops me for certain things, I do not give up anything until I try, and it is my attitude to the issues that I face in my daily life that. That’s the positive attitude,” Omar said.

Omar’s mother has told the press that his biggest dream is to go further in the culinary field, adding that he would love to be an internationally recognized

chef. His dreams, however, are not limited to cooking. Omar is also a big football fan, a sport that his physical disability prevents him from practicing as he desires. That does not prevent him from watching football games, especially those of Barcelona. Omar also aspires to become a football manager, or at least work in a field related to football.

Omar usually posts a little statement for his Facebook fans and publishes a recipe of his own creation once a week. His videos are receiving the admiration of many followers who leave him comments encouraging him to hold on to his dreams.

On his Facebook homepage, Omar is featured in a powerful message; “I am no different from YOU but I am different as you.”