Rabat – Libya’s political agreement, signed on December 17th 2015 in Skhirat, is the basis and framework of the political process in Libya, said, Monday in Rabat, Special Representative of the UN Secretary-General, Martin Kobler. 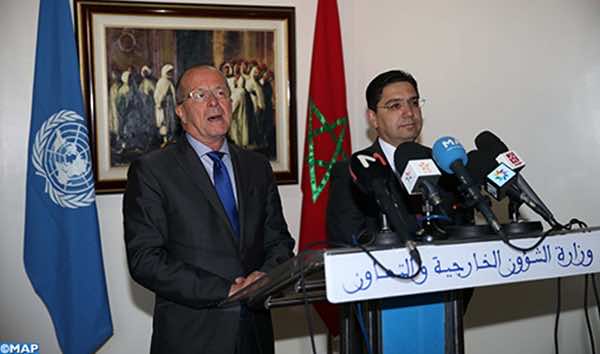 Rabat – Libya’s political agreement, signed on December 17th 2015 in Skhirat, is the basis and framework of the political process in Libya, said, Monday in Rabat, Special Representative of the UN Secretary-General, Martin Kobler.

The UN official also said he is “very grateful” to Morocco’s support for the United Nations in order to improve the political situation in Libya, highlighting the important role played by the Kingdom in the signing of the Skhirat agreement by the parties to the Libyan conflict and in the political process in this country.

In this regard, he said that his talks with Bourita were an opportunity to stress the need to support the political process and coordinate initiatives with regard to Libya in order to promote the economic and social situation in this country that suffers from a military escalation and problems relating to basic services, particularly in the health sector.

For his part, Bourita said that the Skhirat Agreement should remain the “reference and key element” to tackle the Libyan crisis.

The role of the UN is “very important” to avert crisis in general and the Libyan crisis in particular, the minister said, expressing thanks to Kobler for his actions to resolve this crisis.

Morocco, the UN and other parties “will continue to play a constructive role in this issue”, Bourita said, adding that Morocco, which has strong historic and human relations with Libyan people, is well positioned to continue to play a central role in order to find a solution to this conflict.