Rabat - The Mohammed VI Museum of Modern and Contemporary Art (MMVI), will host a symposium under the theme "Africa on the Move: Migration, Diasporas and Mobility,” as part of the "Afrique en Capitale" event scheduled for April 13. 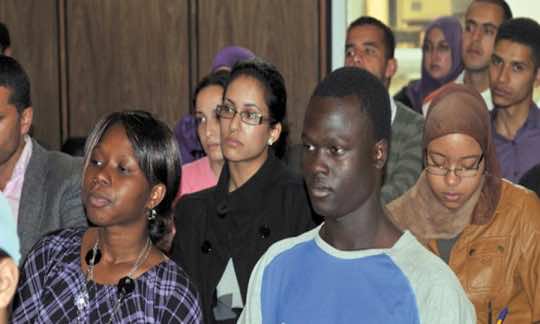 Rabat – The Mohammed VI Museum of Modern and Contemporary Art (MMVI), will host a symposium under the theme “Africa on the Move: Migration, Diasporas and Mobility,” as part of the “Afrique en Capitale” event scheduled for April 13.

The event will discuss ongoing questions regarding migration in Africa.

The symposium will bring together anthropologists, political scientists and migration sociologists from Morocco, Senegal, Burkina Faso, Rwanda, France and the United Kingdom. It aims to take stock of the major changes in African migration.

The event, which will be held from 9:30 am to 6:00 pm, will be opened by Abdelkrim Benatiq, Minister Delegate to the Minister of Foreign Affairs and International Cooperation, in charge of Moroccans living abroad and Migration Affairs.

Driss El Yazami, President of the CNDH, Abdeljalil Lahjomri, Secretary of the Academy of the Kingdom of Morocco, Mr. Noureddine Mouaddib, UIR President and Ambassador Mohamed Methqal, Director General of AMCI, will also be in attendance.

Event organizers argue that African migrants primarily get caught up in security and are presented as a permanent threat to the countries in the North. African migrations are intra-African, as nearly seven out of ten African migrants settle in another country on the continent.

These migrations result in profound changes, as whole regions such as the Maghreb have become, in recent decades, migratory crossroads, where several diversified populations and groups, such as students, asylum seekers, economic migrants, converge.

The organizers add that African countries are, at the same time, countries of emigration, transit and permanent settlements. They become altered by the contribution of new settlers and the multiple relations maintained by expatriate compatriots.

The event is co-organized by the National Museum Foundation (FNM), the National Council for Human Rights (CNDH), the International University of Rabat (UIR), the Academy of the Kingdom of Morocco, the Moroccan Agency for International Cooperation (AMCI) and the MMVI.