Rabat - A bullet launched by the hand of a Taliban assassin when she was just 15 couldn’t stop her. .Today, four years later, Malala Yousafzai stood in the Canadian Parliamentary House of Commons to accept an honorary Canadian citizenship. 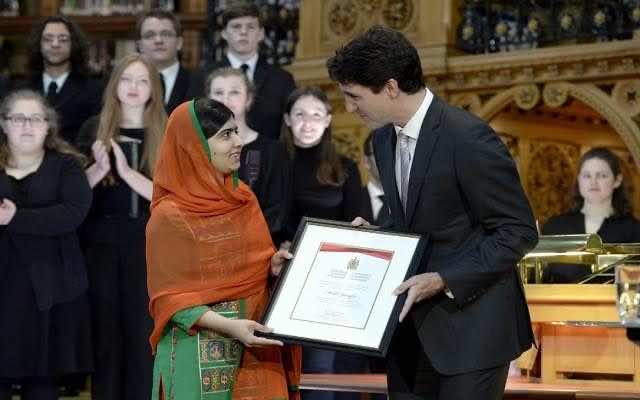 By
Constance Renton
-
Constance graduated from the Television and Radio Broadcasting Program at Canadore College in 1983.
Apr 12, 2017
Spread the love

Rabat – A bullet launched by the hand of a Taliban assassin when she was just 15 couldn’t stop her. .Today, four years later, Malala Yousafzai stood in the Canadian Parliamentary House of Commons to accept an honorary Canadian citizenship.

Only the sixth person to have received the honour, Yousafzai’s diminutive appearance belies a ferocious spirit. Draped in green-trimmed tangerine, the slight 19-year-old stood like a colossus in the Canadian parliament to deliver her address. She was the youngest invitee to ever address the body and she did her predecessors justice, delivering a moving speech before a packed chamber.

She is known affectionately throughout the world simply as Malala. Her day in the Canadian capital, Ottawa, began with a surprise visit to Ridgemont High school, where she addressed the student body.

She urged them not to be constrained by age if they felt inspired to become involved. Activism, she reminded them, is not strictly the purview of adults. “I used to think that I had to wait to be an adult to lead,” she said. “But I’ve learned that even a child’s voice can be heard around the world.”

Once she arrived in the House of Commons, Malala was presented with a certificate and a Canadian flag by Prime Minister Justin Trudeau. Then it was her turn to present a copy of her book, “I am Malala,” to the official Parliamentary library. Then Malala took to the podium to deliver the speech she had waited three years to deliver.

Amid repeated standing ovations, the young Nobel Prize co-winner spoke in glowing terms about Canada’s refugee program, particularly pertaining to Syrian refugees, but also with regard to the recent spate of border crossings from the US.

“Your motto and your stand, welcome to Canada, is more than a headline or a hashtag,” she said. “It is the spirit of humanity that every single one of us would yearn for if our family was in crisis. I pray that you continue to open your homes, your hearts, to the world’s most defenceless children and families and I hope your neighbours will follow your example.”

When she spoke of terrorism, she made no coy attempt to disguise her feelings in polite rhetoric. To anyone committing an act of violence in the name of Islam she said bluntly, “You are not a Muslim anymore.”

It was when she spoke about the innate right of every young girl to “12 years of education” that Malala truly glowed. Educating girls is, for Malala, the cure for most of humanity’s ills; ignorance, poverty, climate change, war. It simply makes no sense to deliberately deprive half of the world’s population to a complete education.

Citing Prime Minister Trudeau’s track record of proud feminist activism, she implored Canada to lead the world in fighting for global girls’ education. “If Canada leads, the world will follow,” she declared.

When Trudeau stepped up to speak he was clearly humbled, describing Malala as a “model of kindness” and a true “trailblazer.” He called her “impossibly humble” before voicing his agreement with her on the issue of girls’ education. “We know that only through education can we achieve real peace.”