Rabat - Turkish people are celebrating at the Justice and Development Party (AKP) headquarters after preliminary results of the referendum announced victory for Erdogan and his party. The Prime Minister has said the results should not divide people. 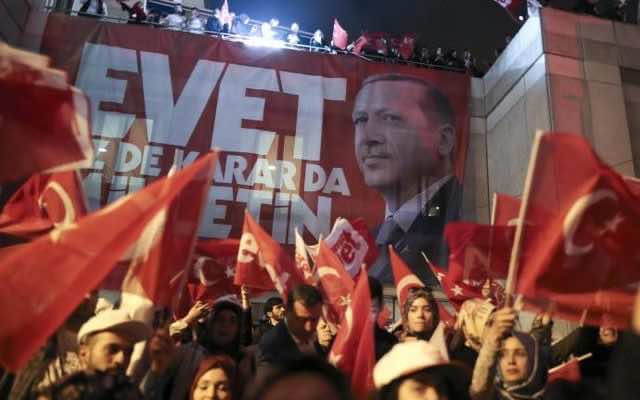 Rabat – Turkish people are celebrating at the Justice and Development Party (AKP) headquarters after preliminary results of the referendum announced victory for Erdogan and his party. The Prime Minister has said the results should not divide people.

The Turkish Prime Minister, Binali Yildrim, announced that the majority of Turks have voted yes in the April 16 referendum, which will change the system in Turkey from parliamentary to presidential.

According to the Anadolu Agency, the Turkish President called on the Prime Minister, the leaders of the right-wing National Movement and the Great Unity parties to give their “congratulations for the referendum victory,” even before the Turkish Election Commission released the official results.

The preliminary results, deduced from 99 percent of the ballots, show that 51.21 percent voted yes while 48.79 percent were opposed to the draft constitution, which was proposed by the AKP and will expand the powers of the Turkish president.

At this time, thousands of supporters are gathered at the headquarters of the Justice and Development Party in Ankara, reveling in the victory, waving white flags saying, “Turkish for Yes” and honking their horns.

At the headquarters of his party the Turkish Prime Minister said that the vote should not divide the Turkish people and that the country would continue its effort to improve the economy and fight its internal and external enemies.

After this vote, the Turks will now elect the president at the same time as parliamentary elections are held. In the event that none of the candidates receives a sufficient number of votes to be elected, a second round of elections will take place.

Furthermore, the president, who must be a Turkish national holding a University level degree, would remain in office for a period of 5 years, renewable for a second and final term. The elected president would not be required to cut ties with his political party.