Rabat - The Moroccan French-language magazine Telquel has apologized yesterday to the Moroccan medical doctor decorated by King Mohammed VI, Aziz Bihi, for alleging that he was a “fraud.” 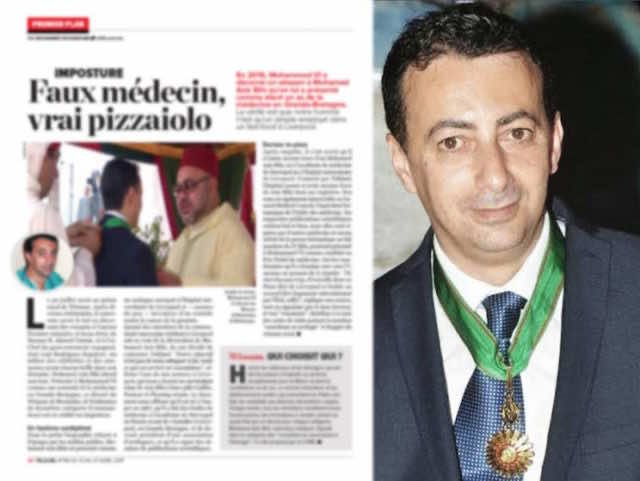 Rabat – The Moroccan French-language magazine Telquel has apologized yesterday to the Moroccan medical doctor decorated by King Mohammed VI, Aziz Bihi, for alleging that he was a “fraud.”

Bidi has indicated that he intends to sue French-language magazine Telquel, despite its apology for “erroneously” alleging he was a fraud. Bihi said that the apology was not “serious.”

Bihi had been decorated with a Throne Medal of National Award, 2nd class on the ceremony of the 17th anniversary of the king’s accession to the Throne on July 30, 2016 for his work as a urological surgeon in Liverpool, the United Kingdom.

In an article titled “Fake Doctor, Real Pizza Maker,” the Casablanca-based magazine claimed that Aziz Bihi was but a “charlatan” who was fooling the Moroccan people. The article went viral on social media, causing uproar from the public.

The magazine claimed that, following an search in the enrollment registrations of the British universities, they found that Mohammed Aziz Bihi was not a doctor and he is not registered in the Medical Union. Instead, the magazine claimed, he was nothing more than a “pizza maker”.

Telquel claimed that Bihi had falsely introduced himself to media and the Palace officials as the head of a department the Royal Hospital at Liverpool whom Britain had nominated for the Nobel Prize in Medicine.

Telquel said that they started their investigations after a group of youth living in Liverpool notified them of Bihi’s “fake” credentials. They decided to debunk him and unveiled how the royal palace has fallen into a trap.

In addition, the author of the article allegedly claimed that Bihi was suggested by the Council of Moroccans Living Abroad, known by its French acronym as CCME, as one of the most skilled Moroccans living abroad.

A Real Doctor After All

As it turns out, the author of the report called neither the “fake” doctor nor the royal cabinet to corroborate their “scoop”. Moreover, they blamed the Conseil Marocain des Marocains a l’Etranger (CCME) which they said had recommended the doctor for decoration by the King Mohammeed VI last July for being one of the most skilled Moroccans living abroad.

Immediately after the report was published, Abdellah Boussouf, Secretary General of the CCME, spoke to media and denied the allegations.

To further refute the allegations, Bihi shared all his degrees, his doctoral diploma in General Medicine from Russia’s Stavropol State Medical Academy in 1995, and to a letter sent to him from the Ministry of Higher Education in 2002 offering a job in a Moroccan hospital.

Telquel apologizes to the King Mohammed VI and Dr. Bihi

“Toque wishes to apologize to His Majesty King Mohammed VI, Mr. Mohamed Aziz Bihi, his family, the CCME, [and] all those who may have been affected by this article and to our precious readers,” the magazine said on its website Sunday night.