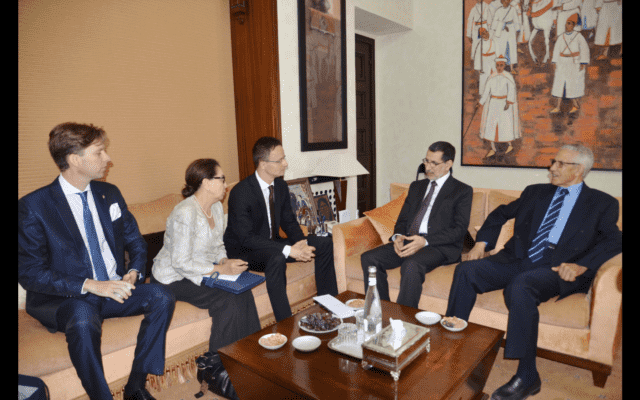 The two sides praised the friendship that unites Morocco and Hungary.

Szijjarto announced that a council for economic cooperation between the two countries has been set up. He added that the Moroccan-Hungarian joint economic commission will meet in October.

During his visit, Szijjarto held discussions with Moroccan Tourism Minister Mohamed Sajid and the Secretary of State for Tourism Lamia Boutayeb, agreeing that tourism cooperation should be boosted.Szijjarto met also with the Minister of Energy and Mining, Aziz Rabah, in order to discuss way of development partnerships in nuclear and hydraulic energy.

Following a meeting with Morocco’s Industry and Trade Minister, Moulay Hafid Elalamy, Szijjarto announced that the two countries are aiming for a trade exchange of 200 billion USD.

The Hungarian minister pointed out his country “could serve as a hub for Moroccan products to Europe, Russia and the Balkans”.

Szijjarto also expressed his wish to see a future resolution of the question of Western Sahara. The ongoing dispute “has a negative impact on regional cooperation,” said Hungary’s Foreign Minister.