Rabat - Still smarting from being upstaged by opponent, Marine Le Pen, at a campaign event on Wednesday, presidential candidate, Emmanuel Macron, is calling it a “communication stunt in a parking lot.”

By
Constance Renton
-
Constance graduated from the Television and Radio Broadcasting Program at Canadore College in 1983.
Apr 28, 2017
Spread the love

Rabat – Still smarting from being upstaged by opponent, Marine Le Pen, at a campaign event on Wednesday, presidential candidate, Emmanuel Macron, is calling it a “communication stunt in a parking lot.”

Centrist, ex-banker, Macron, appears to have got the message about not taking his predicted victory for granted. He spent Thursday in the town of Sarcelles where he left little doubt about his feelings regarding Le Pen and her National Front party, which he labelled “xenophobic.”

While Le Pen courted fishermen, posing for photos aboard a fishing trawler called “Grace of God 2,” Macron spent part of the day at a local gym, discussing youth programs. Talks included the development of sports-related programs for engaging youth, as well as the creation of youth entrepreneur programs and the importance of job creation in the youth sector to tackle unemployment.

Later, during an interview with France’s TF1 television, Macron was asked about his Wednesday visit to a Whirlpool plant in his hometown of Amiens, which was upstaged by a surprise appearance from Le Pen, who showed up hours ahead of him. Macron dismissed the event as a “communication stunt in a parking lot.”

Meanwhile, Macron is stirring controversy in other areas, banning Russian news agencies Sputnik and RT TV channel on Thursday from all his campaign events. A campaign spokesman declared them to be a “two-headed entity” used by the Russian government for spreading propaganda and disseminating fake news reports.

Le Pen has made her support of Putin and the lifting of sanctions against Russia, imposed by the EU in response to the Ukraine crisis, clear. Macron, on the other hand, has adopted a much tougher stance. Complicating the mix are new and persistent allegations on the part of the Macron campaign that Russia has been complicit in attempting to manipulate the campaign in favour of Le Pen’s bid.

In a statement, the Macron has charged Russia with “spreading lies methodically and systematically.”

Moscow, for its part, has strenuously denied any wrongdoing. Foreign Ministry spokesperson, Maria Zakharova, called the allegations “outrageous” and the ban on Russian media a “deliberate and bare-faced discrimination against Russian media by the presidential candidate of a state that has historically been vigilant when it comes to free speech.”

French voters, many of whom strongly dislike both candidates, are finding themselves faced with a choice between someone they describe as an extreme nationalist and a man with a long history of close ties to France’s financial elite. Although analysts and pollsters are predicting a Macron victory, low voter turnout is becoming a real concern. Many feel that if too many voters choose to abstain on May 7th Le Pen could end up winning.

Feeling the burn of that possibility nipping at his campaign heels, Macron is encouraging his supporters and all eligible French voters to exercise their right to vote. “Let’s all face our responsibilities,” he said, stressing that not voting would only end up helping to bring a racist party to power. 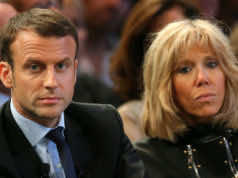 Emmanuel Macron: Media Focus on My Wife’s Age is ‘Misogyny’