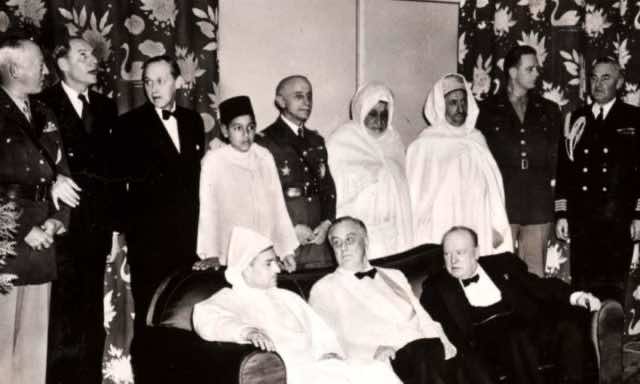 In an article published by Los Angeles Times, Hurowitz starts out by reminded the readers of a famous scene of the legendary American movie “Casablanca”, where refugees in Rick’s Café started singing the French national anthem “la Marseillaise” in an epic act of defiance to the Nazi officers.

The clip, as Richard Hurowitz points out, “became an instant inspiration to moviegoers” at that time of war. But during that time, Morocco saw a “much greater — and real life — act of heroism”, yet “too little known or recognized” compared to the scene from Casablanca, namely: “the protection of the Jews of Morocco by the young Sultan Mohammed V.”

Back then, the young Sultan was under pressure from pro-Nazi French authorities. The collaborationist French Vichy regime sought to implement  the Nazi party’s genocidal policies against Jews living in its Moroccan colony.

Morocco’s history had been marked by Jewish presence for ages. They had been an integral part of the country’s cultural makeup and influential in Moroccan society.

“Jews had lived in that part of the world since well before Carthage fell,” writes Hurowitz, “and over a quarter of a million called Morocco their home in 1940. Members of the community had served the sultans’ court as ministers, diplomats and advisors.”

Mohammed V defied the anti-Jewish laws French authorities tried imposed on his kingdom, which aimed at “restricting certain professions and schools to Jews and requiring them to live in ghettos.”

The laws were enforced but the sultan refused to endorse them. As an act of resistance, he invited representatives of the Jewish community to an official ceremony commemorating the sultanate’s anniversary.

The Moroccan monarch expressed his rejection of the discriminatory laws against the Jews, telling the French officials he refused any distinction between Moroccans. “There are only Moroccan subjects,” the sultan famously said, clarifying that he saw no difference between Muslims and Jews.

Standing against Vichy’s anti-Jewish policies helped protect the community from the ghastly slaughter occurring in Europe. “No Moroccan Jews were deported or killed; nor were they forced to wear the yellow star,” explains the American writer.

When the Nazis and their allies were defeated in North Africa in 1942, “the Moroccan Jewish community was essentially intact.”

His historical role in preserving the lives of dozens of thousands of Jews made Mohammed V a respected figure that many members of Jewish communities around the world, especially those of Morocco origins, still remember.

Seen as a bright chapter of history amid the horrors of World War II, Hurowitz believes it is an example that we can draw lessons from today.

“At a time when anti-Semitism and Islamophobia are on the rise globally, we should honor this overlooked but remarkable example of enlightened leadership,” he writes.