Rabat - First Annual Moroccans of the World Awards kicked off on April 29 in Marrakech, showcasing the successful experiences of Moroccan immigrants who have managed to excel in their fields of expertise. 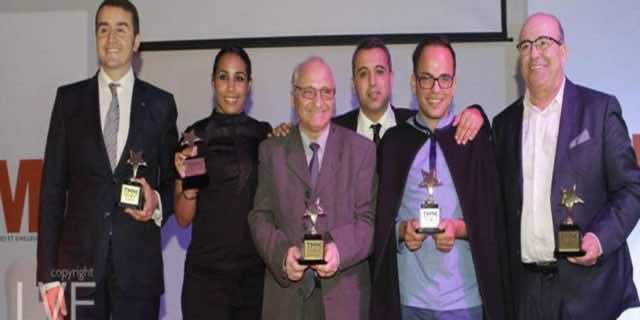 Rabat – First Annual Moroccans of the World Awards kicked off on April 29 in Marrakech, showcasing the successful experiences of Moroccan immigrants who have managed to excel in their fields of expertise.

Initiated by BM Magazine, the event aimed to shed light on Moroccans dispersed around the world and their achievements in several fields, namely sports, art and culture, scientific research, social and political life, and entrepreneurship, by granting award to five out of 15 selected Moroccan immigrants

The event was presided by journalist and writer Maâti Kabbal, the cultural activities coordinator at the Institute of the Arab World (IMA).

The jury included the former captain of the French rugby team, Abdellatif Benazzi, journalist and correspondent of the channel Al-Jazeera in Washington, Mohamed Alami, academic Mohamed Charef and the editor of BM Magazine, Amine Saad.

The first award in the category “Art and culture” was won by French-Moroccan film director Kamal Hachkar. His first documentary, “Tinghir-Jerusalem: The Echoes of the Mellah”, has seen great success worldwide, dealing with the coexistence of Muslim and Jewish families in the Berber town of Tinghir, his natal town, during the French protectorate in Morocco.

The controversy created by the documentary, which according to critics sought to normalize the relations between Israel and Morocco, has brought the issue of Morocco’s multiculturalism into public attention. The film received several awards, including Moroccan National Film Festival.

The Trophy of the category “Company of the World” went to the Franco-Moroccan, Abdeslam Koulouh, engineer in arts and crafts.

The entrepreneur created companies that operate in the fields of energy, maintenance, consulting and industry both in France and in Africa.

The “Scientific Research Award” was given to Jamal Tazi, a researcher, professor of universities in Montpellier, and member of the University Institute of France from 2011 to 2015.

He was chosen for his engagement in scientific research. The scientist has just developed a new drug to fight HIV and he is currently studying a mechanism in the control of gene expression.

Rizlan Zouak, the first Moroccan judoka to represent the Kingdom at the 2016 Olympic Games in Rio, was given the “Sports Award”.

The athlete who grew up in a family of wrestlers, is leading figure for female athletes in Morocco.

“The Politics and Associative Life Award” the Trophy returned to Zakia Khattabi, a Belgian politician and president of the Belgian Green Party since 2014.

The event also paid tribute to the Moroccan inventor Rachid Yazami, winner of the Draper Prize, the equivalent of Noble prize in the field of engineering.

Yizmi expressed his pride of Moroccans living abroad , who have achieved success in overcoming the problems of integrating into their host countries.

He explained that “Morocco is proud to have a community that participates in the development of the world.”

He said that “everything can be achieved if we are armed with the will and the spirit of seriousness and action,” calling on young Moroccans to partake the world of research and innovation.

Attended by several Moroccan figures living in and out of the country, the ceremony also included musical performances by Moroccan musicians and singers living abroad.