Rabat - Throughout its history, Morocco has been home to great athletes who proudly flew the national flag in global sports events. 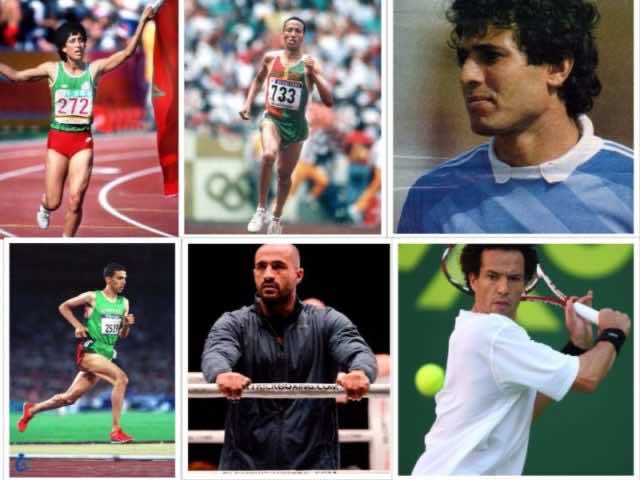 Rabat – Throughout its history, Morocco has been home to great athletes who proudly flew the national flag in global sports events.

In running, football, tennis, kickboxing and other disciplines, many names rose to fame and glory, gaining Moroccans’ respect and veneration.

Morocco World News has assembled a list of the top sports names in the Kingdom’s history, so that readers can argue among themselves about who among them is the greatest.

Way before Pelé, FIFA’s footballer of the 20th century, the Moroccan Larbi Ben Mbarek (known as the “Black Pearl”) was a legend of his time.

“If I were the king of football, then Benbarek is the God,” the Brazilian footballer once said of his Moroccan colleague.

Born in Casablanca during the French occupation of Morocco, Benbarek became the first internationally successful African football player when he made it to the French league after joining Olympique de Marseille in 1938.

In the same year Benbarek joined the French football team, for which he played for 16 years.

His transfer to the Spanish Club Atletico Madrid in 1948 was even a bigger breakthrough in his career. The Moroccan “Black Pearl” played for the Los Colchoneros for five seasons, scoring 63 goals in 123 appearances.

During Los Angelo’s 1984 Olympic Summer Games, history was made. Nawal El Moutawakel, then a young Moroccan female hurdler studying in the US, snatched the 400 meter hurdles gold medal.

The Iowa State University student became the first African female Olympic champion, paving the way for girls from Morocco, the continent, and the Arab world to chase their dreams of becoming champions.

A female pioneer in athletics, El Moutawakel became member and then Vice-President of the International Association of Athletics Federations (IAAF).

She was the Minister of Youth and Sports on two occasions, though her ministerial record was not as bright as her career as an athlete. Still, she remains one of Morocco’s major sports figures.

Said Aouita is more than just a name. During the 1980s he became another of Morocco’s legends thanks to his multiple world titles and records. From 800 meter to 5000 meter races, the track and field runner was one of the fastest men on earth.

His biggest achievement came during 1984 Summer Olympics in Los Angeles, when he won the 5000 meter gold medal.

Other titles followed. In 1987 He snatched three gold medals at the Mediterranean Games in Latakia and World Championships in Rome, winning the 1500 meter and 5000 meter runs, before adding the 3000 meter title at World Indoors Championship in Budapest in 1989 to his list of accolades.

Aouita’s achievements inspired other Moroccan athletes, such as Khalid Sekkah and Hichem El Guerrouj, to follow in his footsteps.

The current generation of Moroccan football fans remember him as the coach who led the national team to the 2004 African Cup of Nations Final, beating out strong teams such as Nigeria, Algeria, and Mali.

Despite losing the title to hosting Tunisia, the “Atlas Lions” were greeted as heroes. The whole country was chanting the name of Zaki Badou.

But before he became the team’s coach, Badou was a legendary goalkeeper of the Morocco’s national team and several clubs such as Wydad of Casablanca and the Spanish Club of RCD Mallorca.

Seen by many as the best Arab player to assume that position, he was the last goalkeeper to win Best African Footballer of the Year  in 1986, awarded by the Confederation of African Football (CAF).

Zaki left an undeniable mark not only on the Moroccan team, which he helped achieve a historical qualification to the eighth-finals during the 1986 World Cup in Mexico, but also on Mallorca for which he played six seasons, where he shone as one of the best goalkeepers in La Liga.

A statute was erected on the Spanish island in memory of his contributions to the club.

He was the “king” of middle-distance races. The multi-times world champion and two times Olympic-gold medalist was the latest great Moroccan runner.

Whenever Hichem El Guerrouj was racing, Moroccans sat glued to their seats, watching the Berkane native outrun all other competitors. They would cheer for his wins and cry for his losses, especially when he was unable to win the Olympic gold medal in 2000.

In 2004 he made history by winning gold medals in 1500 and 5000 meter races, thus cementing his legacy as one of the greatest ever.

During the quarter-finals of the Australian Open in 2003, fans had the pleasure to witness one of the greatest games in tennis history.

The Moroccan Youness El Aynaoui put on an unforgettable show as he battled American rising star Andy Roddick for victory.

Five hours of intense combat ended with a win by Roddick, but the game earned El Aynaoui worldwide respect and admiration. The game broke a world record with the longest fifth set in the Grand Slam.

With five ATP tournament titles, including Doha and Munich, El Aynaoui is the most successful Moroccan tennis player.

He may not be the greatest Moroccan athlete, but he is undoubtedly the most famous, acclaimed worldwide as a kickboxing legend.

A Dutch national of Moroccan descent, he enjoyed huge popularity in Europe and Asia from 2005 to 2011 before he became well-known in his home country.

Unfortunately, his career has since been damaged by his unsportsmanlike behavior in and outside the ring, causing him twice to be stripped of his world title and sentenced to terms in prison.