Morocco World News
Home Economy Minister of Industry: ‘Before We Had to Market Morocco, Now, Morocco is...

The Minister of Industry, Investment, Trade and Digital Economy, Moulay Hafid Elalamy, announced the plan at a press conference held last week following the meeting of the Investment Committee.

Morocco no longer needs to prove itself to Korean or American investors, he explained. “They know Morocco, and the foreign investors in the country are the best ambassadors.”

A study conducted by Ernest and Young asserted that Morocco is one of the three largest destinations for foreign direct investment in the automotive field. “Interestingly, the automotive sector emerged as the top FDI jobs creator in Africa in 2016,” explained the report.

“The country has positioned itself as an export base for Europe, the Middle East and Africa. In 2015, Ford Motor Co. and PSA Peugeot Citroen announced plans to expand operations in Morocco. Peugeot is planning a US$632m assembly plant near Kenitra, with capacity to build 90,000 vehicles a year, scheduled to start production in 2019. Following Peugeot’s investment announcement, Morocco expects its annual automotive exports to reach USD 10.2b by 2020,” said the study.

Referring to the Ernest and Young study, the minister said that “We are in front of South Africa and it’s not bad. But my benchmark today is elsewhere. It is Spain and Romania, for example.”

Elalamy was also pleased to announce that the majority of investments were made by Moroccans, assuring that foreigners and Moroccans were on an equal footing.

“I am pleased that more than 90% of the reported investments are made by Moroccans. We encourage Moroccans to invest as much as possible. Foreigners also invest on an equal footing with Moroccans. In Morocco, unlike other countries, there is no discrimination.” 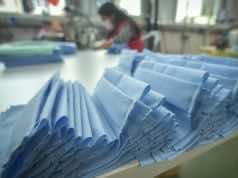