Rabat- On May 20 Moroccan heavyweight kickboxer Ismael Lazaar will be fighting the fight of his life against Glory champion Rico Verhoeven in Den Bosch, Holland.

Rabat- On May 20 Moroccan heavyweight kickboxer Ismael Lazaar will be fighting the fight of his life against Glory champion Rico Verhoeven in Den Bosch, Holland.

The fight will mark Lazaar’s debut in the best kickboxing promotion today.

The bout is scheduled for five rounds, for which “The Star” has been preparing intensively.

In a video released by Glory, the Moroccan heavy-handed fighter warned Verhoeven that he will have a hard time facing.

“The fight is going to be terrible for him”, said Lazaar.

A much anticipated clash, Moroccans be looking forward to watching Lazaar make history against “the King of Kickboxing”. 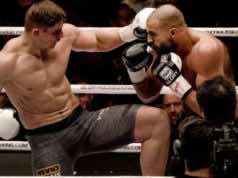