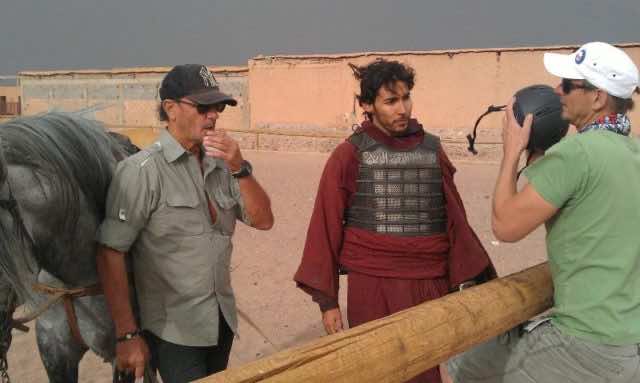 In an interview with MWN, the young talented performer shared his experience as an actor and talked about his hopes and dreams for the future.

MWN: How did your acting career begin?

Hatim Abdelghafour: When I was in high school I used to do sketches with a friend of mine called Walid Lagnaoui. We were amateurs and I wasn’t taking art seriously. After high school, I studied English literature at Cadi Ayyad University in Marrakech.

During my university studies I started to taking part in drama clubs just as a hobby and performed in various plays such as “The Tragedy of Death and Love”, “Air of Time”, “The Curse of Why”  and “The Stranger and Women”. Thanks to the latter I received the award of best actor in the International Festival of University Theater in Agadir. Later on, I took drama classes at the Institut Français and joined the Association of Young Artists.

I benefited from various trainings in acting techniques on how to monitor the body, looks, voice, gestures, and presence on stage and I did another training on techniques of acting in front of the camera with Cours Florent, an actor school in Paris. Afterwards, I felt that my ambition was bigger than just university theater. The turning point in my artistic career was when I started being cast in movies and drama series .

That was the beginning of my professional life as an actor.

What is the difference between working with Hollywood and Arab directors, and Moroccan ones?

Hatim Abdelghafour: I think working with International productions in general, especially those of Hollywood, are more professional and well organised. It is the same when it comes to international film directors and Arab directors that I worked with. They believe in the competence of actors while they select them in a very professional casting. They have great sincerity and credibility and a lot of passion and patience in their artistic work, without forgetting the way they communicate with their actors.

Concerning Moroccan film directors, I think their films reflect the reality of how they work, how they get public funds, how the script is developed, how the characters of the film are distributed and how the public funds are spent on the film.  I think that the whole process suffers from lack of sincerity, credibility, passion, patience and communication.

What was it like working along a film superstar like Nicholas Cage? Was it a daunting experience?

Hatim Abdelghafour:  It was an amazing experience to work with such a humble superstar like Nicolas cage. When I finished shooting with him I told him:  ‘‘It is an honour to work with you’’ then he answered: ‘‘The honour is mine’’. Before we start the shooting I did a casting with the film director Larry Charles.

The director appreciated my acting skills. I gained a role to play in the movie among well-known Hollywood actors. I was given the role of a taxi driver, and all the scenes I shot in the film were with Nicolas Cage who is a machine of words and acting. It was a good experience and an adventure for me to improvise with him in some scenes of the film.

The surprise was that when the film was released in USA I appeared twice with Nicolas Cage in the trailer of the film and this is a good sign about my performance in the film.

You were cast in major Hollywood and Middle Eastern productions, yet you continue to play in short films. What short films have that Western movies and epic Arabic drama series don’t?

Hatim Abdelghafour: Some young film directors get in touch with me and ask me to take part in their works, because they see me as the right profile for their films.  I work with them for free. They don’ t have enough money to pay actors and I accept to work with them. My only condition is to send me the script first before I give my OK.

I find that short films are very interesting when they have good messages to deliver, and it is also a new experience for me and good exercise for my acting skills.

How do you picture yourself as an actor a few years from now?

Hatim Abdelghafour: I see myself more in international films because it gives actors fame and more opportunities to develop their careers. It also guarantees a respectable income as opposed to Moroccan ones, which are still ruled by friendships and closed circles rather than talent and competence.

I also dream to be an Oscar winner. I always believe that nothing is impossible and one can achieve success as long as one believes in his or her talents. I always urge people to dream, because dreams are the bridge between imagination and reality. El Khalfi: Defense of Territorial Integrity is the Cause of all Moroccans