Rabat - Dublin’s city council has voted to hoist the Palestinian flag alongside the Irish flag for the month of May, in solidarity with the Palestinian people on the 50th anniversary of the Israeli occupation of the West Bank. 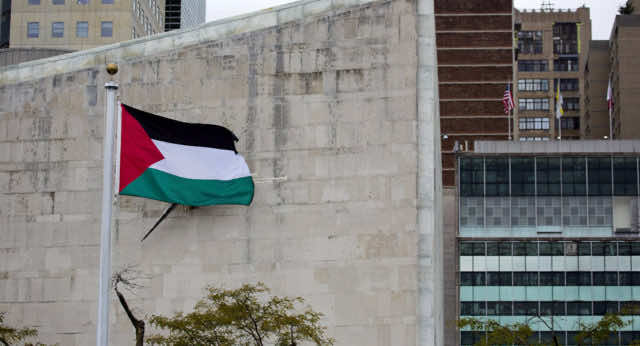 By
Constance Renton
-
Constance graduated from the Television and Radio Broadcasting Program at Canadore College in 1983.
May 11, 2017
Spread the love

Rabat – Dublin’s city council has voted to hoist the Palestinian flag alongside the Irish flag for the month of May, in solidarity with the Palestinian people on the 50th anniversary of the Israeli occupation of the West Bank.

It was not a unanimous vote but the motion passed and the flag has been raised. The original notion was proposed by People Before Profit Alliance councillor, John Lyons. He wanted to mark the 50th anniversary of the Israeli occupation as well as show support with the international community, which is increasingly favouring the Palestinian cause.

There were the inevitable detractors. Councillor Anne Feeney, for one, proposed a counter solution involving the raising of both the Palestinian and Israeli flags in unison, to “acknowledge the suffering experienced by civilians on both sides.”

Still other councillors voted against both motions, saying only Irish and European flags should be flown at the Dublin City hall.

Understandably, the most vehement objection came from the Israeli ambassador. On behalf of his government he lodged a formal complaint ahead of the vote saying that the move would be, “highly politically charged.” He also expressed the opinion that the flying of the Palestinian flag would be a one-sided approach to the conflict.

According to the Times of Israel, reaction back in April to the motion was immediate and sharp. “… it will essentially be waving a white flag of surrender to terrorist organizations, hatred and extortion,” the Israeli Foreign Ministry’s spokesman Emmanuel Nahshon told the Ynet news site.

Calling the decision “hostile”, Nahshon added that it “… affects first and foremost the decent citizens of Dublin, and also places a stain of shame on the city.”

Lyons, on the other hand, is pleased with the outcome saying, “I think the gesture itself is a symbolic one, the flying of the flag. I think more and more people are of the opinion that the very state of Israel and how it’s behaving in an extreme manner is actually destabilizing its cause and argument.”