Rabat - Mawazine Rhythms of the World Festival, which celebrates its 16th birthday this year, has become an international musical rendezvous in honor of cultural diversity, with a collection of artists coming from every corner of the globe. 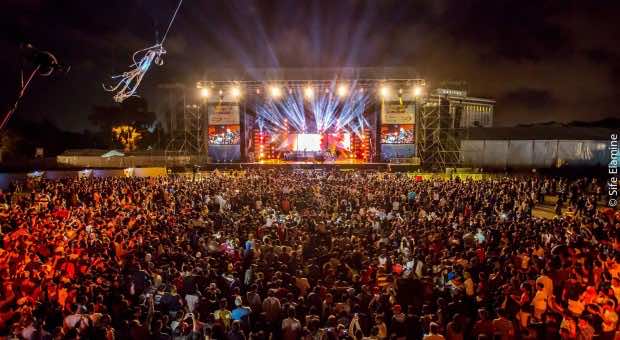 By
Chaima Lahsini
-
Chaima Lahsini is freelance journalist and activist with the Al-Fam collective in Rabat.
May 14, 2017
Spread the love

Rabat – Mawazine Rhythms of the World Festival, which celebrates its 16th birthday this year, has become an international musical rendezvous in honor of cultural diversity, with a collection of artists coming from every corner of the globe.

Rabat’s annual cultural event, with its various stages, is sure to meet everyone’s eclectic musical taste. On the Nahda stage, the soulful chants of the East are celebrated with the greatest voices of Oriental music, offering the audience a unique opportunity to discover the best of the modern and classical tunes of the region.

The tantalizing atmosphere of the Nahda stage brings together tens of thousands of people at each concert, illustrating Mawazine’s passion for Arab music. On the shore of Bouregreg, the stage pays tribute to the rich rhythms of Africa by honoring the music of our motherland with the great Ivorian reggae singer Alpha Blondy in closing concert.

Throughout the nine days of the festival, audiences will meet the band Panache Culture for the first time, rapper MHD, Amadou and Mariam, the great Bonga Ibibio Sound Machine, Baloji, the afrobeat formation Pat Thomas and Calypso Rose.

The Mohammed V National Theater will once again be the venue for Mawazine’s renowned performances, with the legendary Charles Aznavour as the opening act of the festival’s outstanding program. Aznavour remains undoubtedly the greatest French composer-songwriter and one of the greatest voices of modern popular music.

In addition to Aznavour, Anoushka Shankar, Lotfi Bouchnak, Badr Rami and Susana Baca will rendezvous for this exceptional program.

As for lovers of Moroccan music, the Sale stage will gather together the Kingdom’s greatest talents to offer the public nine days of richly diverse music, including Gnaoua, Châabi, rock, reggae, fusion, Amazigh, rap and hip-hop. Meanwhile, the site of Chellah will pay tribute to the most beautiful musical traditions, honoring the rhythms of the globe.

Like every year, Mawazine will undoubtedly keep all of its promises and will once again offer its public an unforgettable musical experience.