Rabat - The African Union (AU) has condemned Saturday’s attack against a Moroccan peacekeeper from the United Nations Stabilization Mission in the Central African Republic (MINUSCA). The soldier was fatally wounded in a shootout with an unidentified armed group in Bangassou. 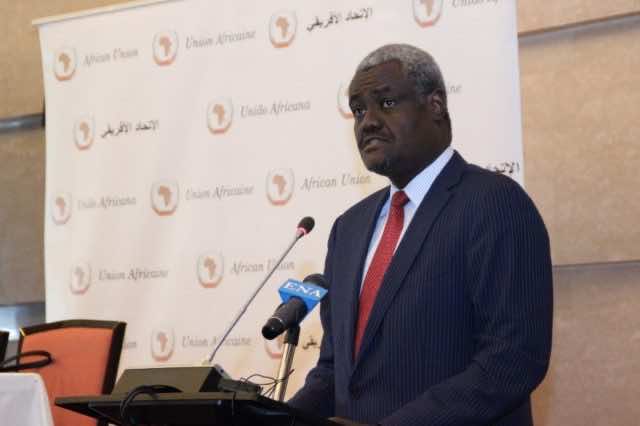 Rabat – The African Union (AU) has condemned Saturday’s attack against a Moroccan peacekeeper from the United Nations Stabilization Mission in the Central African Republic (MINUSCA). The soldier was fatally wounded in a shootout with an unidentified armed group in Bangassou.

“The President of the AU Commission, Moussa Faki Mahamat, strongly condemns the despicable attacks by armed assailants on 8 and 13 May 2017 in Bangassou, in the south-east of the Central African Republic (RCA), and in the vicinity of this locality, against the MINUSCA, resulting in several deaths and injuries among peacekeepers,” the AU said in a statement.

Faki has also condemned the violent and often fatal criminal acts that target the civilians in these areas, which have induced further displacement of populations, the statement added.

The president of the AUC also extended his condolences to the families of the victims, wishing the injured victims a quick recovery.

He stressed the AU’s willingness to cooperate with the region, the UN and other international actors that help the CAR to overcome the challenges posed by the ongoing civil war.

The latest attack comes less than a week after Moroccan and Cambodian peacekeepers were ambushed on the Rafai-Bangassou road, 220 km south-east of the town of Bria, in CAR.

The attack led to the death and injury of 12 Moroccan and Cambodian peacekeepers. According to the Moroccan Royal Armed Forces (FAR), nine other Moroccan soldiers were injured during this same attack. One remains in serious condition. The soldiers were part of an engineering unit working to construct roads, bridges and other infrastructure.

The UN Secretary-General Antonio Guterres has also expressed “outrage” and called on the authorities to “investigate the attacks to bring those responsible to justice.”

This is not the first time peacekeepers have been targeted in the Central African Republic. In January 2017, two Moroccan members of FAR squad of the MINUSCA were killed in an armed attack near the town of Bria on the northeast of the capital Bangui.

MINUSCA, established in 2014 in response to the country’s ongoing civil war, has deployed more than 12,000 troops to protect civilians from the repercussions of violence between Christian and Muslim sects.