Rabat - King Mohammed VI chaired, on Monday at the Rabat Royal Palace, the signing ceremony of agreements related to the Nigeria-Morocco Gazoduc Project and the Moroccan-Nigerian cooperation in the field of fertilizers. 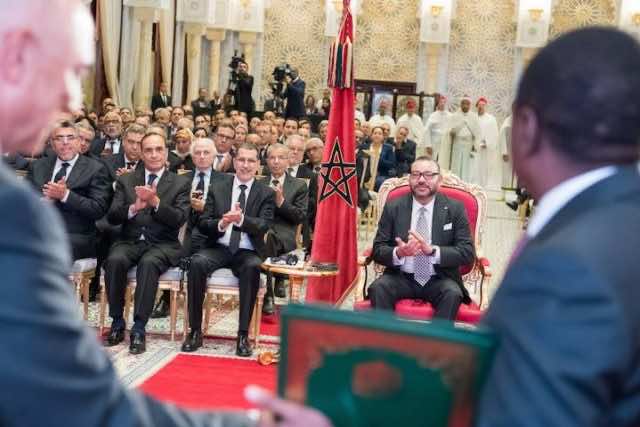 Rabat – King Mohammed VI chaired, on Monday at the Rabat Royal Palace, the signing ceremony of agreements related to the Nigeria-Morocco Gazoduc Project and the Moroccan-Nigerian cooperation in the field of fertilizers.

At the beginning of this ceremony, Nigerian foreign minister Geoffrey Onyeama gave a speech in front of the King in which he extended the greetings of Muhammadu Buhari to the sovereign, recalling the latest visit by King Mohammed VI to Abuja during which the two leaders decided to forge ahead with bilateral cooperation to encompass the different areas.

The conclusion of these agreements, today, only few months after the visit of King Mohammed VI to Nigeria, proves the success of the Rabat-Abuja partnership, a success that would contribute to the will of the two heads of states to ensure the implementation of bilateral projects, said Onyeama.

Foreign minister Nasser Bourita presented the broad lines of the Gazoduc project that will link Nigeria to Morocco, and reflects the shared vision of the two leaders, King Mohammed VI and Muhammadu Buhari, in favour of a sustainable, active and solidarity-based joint development for Africa, based on a south-south cooperation.

The Nigeria-Morocco pipeline will have a positive impact on over 300 million inhabitants, he said, noting that it would speed up electrification projects in all west Africa, serving as a basis for the creation of a competitive electricity regional market.

Director of the Nigerian National Petroleum Corporation (NNPC) Farouq Said Garba outlined the pipeline cooperation agreement, which was inked on this occasion by the Moroccan Office for Hydrocarbons and Mining and the NNPC.

Speaking on the Moroccan-Nigerian cooperation in the field of fertilizers, president of the Fertilizers Producers & Suppliers Association of Nigeria (FEPSAN) Thomas Ethu underlined that cooperation between the OCP group and the FEPSAN helped, in a first phase, to transfer know-how in relation to blending, storage and transportation.

CEO of the Nigerian Sovereign Investment Authority Uche Orji noted that collaboration between his body and the OCP group will touch on exploring and upgrading phosphates reserves in Nigerian states (Sokoto, Ogun, Edo, Imo).

CEO of the OCP group Mostafa Terrab said that the partnership concluded between Morocco and Nigeria is a model for south-south cooperation.

It concerns the whole agricultural value chain, mainly the setting up of fertilizing solutions that are adapted to the Nigerian soil and cultivation, he said.

This collaboration, which enters its second phase, will enable to maximize local fertilizer production, through the creation of a platform for basic chemical products, secure the Nigerian market’s fertilizer supply for competitive prices and reinforce local distribution channels.

HM the King presided, afterwards, over the signing ceremony of a cooperation agreement on the Nigeria-Morocco Pipeline. It was signed by director general of the Moroccan Office for Hydrocarbons and Mining Amina Benkhadra, and CEO of Nigerian National Petroleum Corporation Maikanti Kacalla Baru.

The second instrument, inked under the sovereign’s chairmanship, is an agreement between the OCP group and the FEPSAN for fertilizer capacity-building and production in Nigeria. It was signed by Mostafa Terrab and Thomas Etuh.

The ceremony, which was marked by the screening of two institutional films on the two projects’ socio-economic impact regionally and internationally, was attended mainly by the head of government, speaker of the house of representatives, the King’s advisors, government members, an important Nigerian delegation, ECOWAS representatives, and members of the diplomatic corps accredited in Rabat.