Rabat - After the parliament rejected a proposal to increase Morocco's budget for education, activists have launched an online petition to reverse the decision. 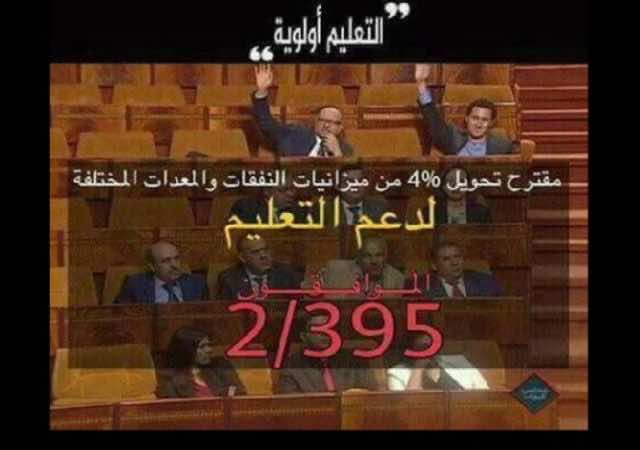 Rabat – After the parliament rejected a proposal to increase Morocco’s budget for education, activists have launched an online petition to reverse the decision.

Two Federation of the Democratic Left (FGD) MPs, Omar Balafrej and Mustapha Chennaoui, presented to the House of Representatives a set of nine amendments to the 2017 Finance Bill which would devote 4 percent of the national budget to education. They were the only ones who raised their hands in approval.

“The proposal was categorically rejected by the parliament. [However,] we must restart the debate on the budget of education, each Moroccan loves his/her country should adheres to the educational reform project,” wrote Soulaiman B., the creator of the petition.

After a photo of the two FDG members raising their hands was shared widely on social media platforms, Moroccans have started taking photos with the same pose as a show of support to the campaign.

“Reality is, education in Morocco suffers from many deficiencies,” Belafrej had told Morocco World News previously. “The program the FDG proposed is, indeed, true to the federation’s principles, but it is also reasonable and applicable.” The MP then asked campaign supporters to remain loyal to the FGD during the next elections.