By Rabbi Allen S. MallerRabat - On May 18, 2017 the parliament in Belgium’s French-speaking Wallonia region, with 66 votes for and three abstentions, banned the slaughter of animals without first stunning them, despite opposition from Jewish and Muslim communities defending their rituals. The ban that will take effect in June 2018, though ritual slaughter will be exempted until September 2019.

Rabat – On May 18, 2017 the parliament in Belgium’s French-speaking Wallonia region, with 66 votes for and three abstentions, banned the slaughter of animals without first stunning them, despite opposition from Jewish and Muslim communities defending their rituals. The ban that will take effect in June 2018, though ritual slaughter will be exempted until September 2019.

Religious laws in Islam and Judaism require animals be conscious when their necks are slit as quickly and painlessly as possible.

As with non-medical circumcision of boys, ritual slaughter of animals, is facing opposition across Western Europe by far-right politicians who view it as a foreign element to their Christian culture; and by humanist liberals who believe it is inhumane.

Kosher foods are those that conform to the regulations of Kashrut, the Orthodox Jewish dietary law. However, many Jews also use the term un-kosher to describe unfit social, moral and ethical behavior.

In both Jewish and Muslim law slaughtering must be swift and at single point on the throat; blood has to be completely drained. The basic principle is: “Forbidden to you is that which dies of itself, blood, pig flesh, that on which any other name than that of Allah has been invoked, the strangled (animal), that beaten to death, that killed by a fall, that killed by being smitten with the horn, and that which wild beasts have eaten, except what you slaughter, and what is sacrificed on stone (alters) set up (for idols) and that you divide by the arrows; that is a transgression. (Qur’an 5:3 and 6:145)

All of these prohibitions are also found in the the Written Torah law of Moses and the Oral Torah law of the rabbinic tradition.

Halal requires a prayer before every slaughter. Orthodox Kashrut requires a holy intention to slaughter according to God’s commandments; but does not require a specific audible prayer before each act of slaughter. “Eat of that over which the name of Allah has been mentioned, if ye are believers in His revelations.” (6:118)

The term ‘muslim’ slaughter applies also to religious Jewish slaughters because the Qur’an explicitly states: “The food of the People of the Book is lawful unto you and yours is lawful unto them.” (5:5)

In Christian countries most Muslims prefer to buy Kosher foods, that require strict avoidance of any contact, direct or indirect with pork products, because they are fit/halal/kosher for Muslims.

Thus we can see that in the modern world, where millions of Muslims live as a minority within Christian lands, two developments have occurred. One; Muslims can rely on Kosher food, but not on non-kosher food products.

Two; although Orthodox Jews still cannot use Halal food, the majority of Jews, who are no longer Orthodox, and who now have a diet that is much closer to Halal than to strict Orthodox Kashrut, can and should use Halal food. 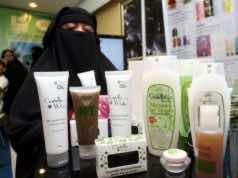 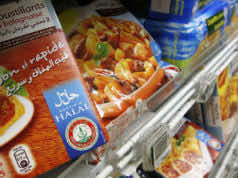