Rabat - Does Morocco have its own National Front, its own racist nationalist movement? As anti-immigrant and anti-Muslim rhetoric grows overseas, it appears that some Moroccans are willing to direct similar attacks toward sub-Saharan migrants in the Kingdom.

Rabat – Does Morocco have its own National Front, its own racist nationalist movement? As anti-immigrant and anti-Muslim rhetoric grows overseas, it appears that some Moroccans are willing to direct similar attacks toward sub-Saharan migrants in the Kingdom.

The recent murder of a mall guard in Fez by three undocumented Cameroonian residents has been followed by strong racist and xenophobic backlash against the sub-Saharan African migrant community residing in Morocco. Some social media called for police crackdowns on migrant communities, characterizing sub-Saharans widely as criminals.

Social media commenters wrote that sub-Saharan migrants in Morocco were “animals,” saying that “they should be sent back to their own countries.” Others responded by noting that this language mimics that used by supporters of Marine Le Pen’s National Front or Geert Wilders against Arab migrants in Europe.

Migrants residing in Morocco are often presupposed to be criminals. Helena Maleno Garzón, a migration expert at the Tangier-based El Colectivo Caminando Fronteras, calls this the “criminalization” of migrants.

“The racists who innately hate foreigners – they generalize,” Hicham Rachidi, a coordinator at the Anti-Racist Group for the Defense and Support of Foreigner and Migrants (GADEM) told Morocco World News. Among its many activities, the organization tries to fight against stereotypes labeling all migrants as inherently criminals.

While the phenomenon of migrant “criminalization” is widespread, Garzón pointed a finger at the media, who she said often does not respect the ethics required of the profession. “When an individual commits a crime, it should not be related to his or her nationality.”

Rachidi noted that  “insults and the offenses that some group of Moroccan have lashed out at the sub-Saharan migrants are similar to the far-right parties in Europe after a Moroccan involved in a crime.”

Garzón, a Spanish national who has lived in Morocco for fifteen years, called on Moroccans to not persecute sub-Saharan migrants in the same way that Europeans continue to do with Moroccan and Algerian migrants.

She stressed that the Moroccan community abroad consists of workers, fathers, mothers, and students as the same thing applied to the sub-Saharan African migrants in Morocco.

Discrimination beyond the Constitution

What does Moroccan law say about racist discrimination and harassment? Aziz Idamine, a human right expert and researcher in political science, explains that Morocco guarantees protection against discrimination in three legal frameworks: the 2011 constitution, which prohibits all forms of discrimination; international conventions against racial discrimination signed by the Kingdom; and criminal law.

Idamine said that the Public Prosecutor has precedent to sue those making racist public statements and said that Morocco will likely add a national device to process complaints of racial discrimination.

“There is no direct punishment on the basis of discriminately insulting people, but the punishments can be adapted by the Public Prosecutor and judiciary as humiliation against the other,” Idamine added.

However, Rachidi claimed that the government does not take initiative to counter xenophobic and racist comments. He said that has been unable to get the Moroccan Minister of Justice to reveal the actual number of people sued and sentenced for verbal racial harassment.

The coordinator recalled the recent verbal assault on Ousseynou Thioune Senegalese footballer of Moroccan soccer team Ittihad Tangier, who received racist and provocative shouts from the supporters of Olympique Khouribga last April. GADEM denounced the acts and urged the Royal Moroccan Football Federation to undertake proper legal action, but it has so far not done so.

Moroccan Union Denounces the Expulsion of African Migrants from Algeria 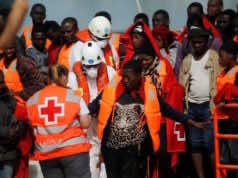