At the beginning of the 27-minute video entitled “The Colors of Morocco” , the voice-over tells viewers that they will see an unusual visual experience and discover the most spectacular places in the country.

The video features the breathtaking shades of Ifrane’s green landscape and the tranquility which pervades the mountain town.

The video also shows Morocco’s red southern cities, including Ouarzazate and the valleys of Ounilla, located in Merzouga, as well as the region’s beautiful Kasbahs.

Blue and white are introduced as the most common colors used in mosques and houses and other alleys of the throughout the Moroccan cities. The ochre shades relate to the colors which encircle the peaks of the Atlas Mountains and Moroccan Sahara deserts.

The video discusses also the livelihood of some people and how they earn their living in these areas. 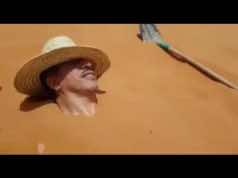