Rabat - Renowned weather forecast reporter Samira al-Fayzazi died on Friday, May 19 at a hospital in Rabat, after having suffered from colon cancer since 2012. 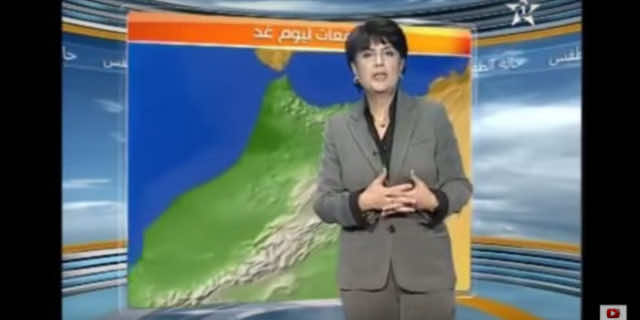 Rabat – Renowned weather forecast reporter Samira al-Fayzazi died on Friday, May 19 at a hospital in Rabat, after having suffered from colon cancer since 2012.

The 55-year-old weather reporter, originally from Nador, has been buried in the cemetery of the Riyadh neighborhood in Rabat after the Friday prayer in the presence of family members and close friends.

The Moroccan “Lady of the Weather” reported the weather newscast to the Moroccan audience for over 25 years.

Al-Hussein Bouaid, Chairman of the Communication Department of the National Directorate of Meteorology, presented the channel director’s condolences to the friends and family of Al-Faqida.

“Samira Al-Fayazi provided great services to the citizens through the weather bulletin. Moroccan television and meteorologists lost one of the characters who gave much to this area,” said Bouaid.

False rumors of her death swept over national media last week. A source close to Al-Fayazi had denied these rumors, explaining that the journalist had left the clinic where she was hospitalized but “suffered enormously,” reported Huffpostmaghreb.

The accomplished TV personality was interviewed by Hit Radio four years ago, saying that “cancer does not equal death. It is a disease like any other, and there are several other more serious diseases.”