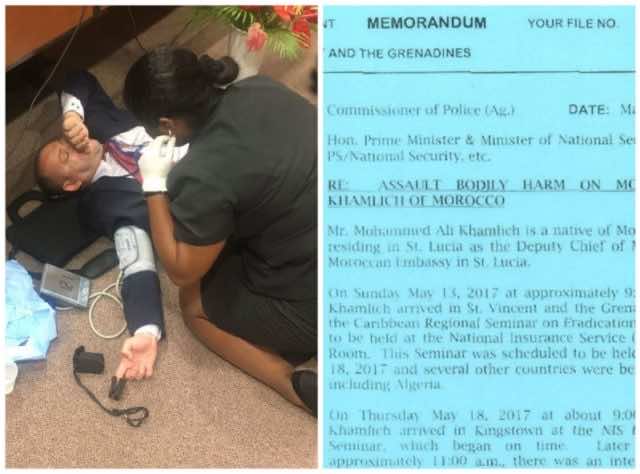 Copies of the reports have indicated that, Ali El Khamlichi, the Deputy Chief of Missions for the Moroccan Embassy in Saint Lucia, was the victim of the assault.

The police report gave an account of the physical attack that took place on Thursday during a meeting of the United Nations Committee 24 in Saint Vincent and the Grenadines.

Ali El Khamlichi took part in the meeting in his capacity as Deputy Chief of Missions for the Moroccan Embassy in Saint Lucia.

The report indicated that during an intermission in the UN seminar, at approximately 11.am, Soufiane Mimouni, the General Director of the Algerian Ministry of Foreign Affairs, approached the Moroccan ambassador and the ambassador of Dominica, who were engaged in conversation.

“Mr. Mimouni became aggressive and began to accost the Moroccan ambassador”. As a result, El Khamlichi “intervened and told Mr. Mimouni to desist from assaulting the ambassador,” said the report.

At this point, the Algerian ambassador turned more violent. He struck the Moroccan Deputy Chief of Missions “on his face with his hand, resulting in an injury.”

Following the assault, the Moroccan Diplomat was taken to Milton Cato Memorial Hospital.

The medical examination stated he was brought into the Emergency room “with blunt trauma to the face, reportedly inflicted by known assailant.”

During his examination, El Khamlichi complained “of headache, pain to the mouth as well as chest wall tenderness.”

He left the hospital “in no acute distress,” as the report mentioned.

The assault, however, was described by the Moroccan Minister of Foreign Affairs, Nasser Bourita, as “unprecedented” and “going against all diplomatic etiquette.”

Bourita said the physical assault on a Moroccan diplomat by the third ranking official of the Algerian Ministry of Foreign Affairs, shows “the degree of nervousness of Algerian diplomacy.”

Algeria denied the incident, claiming it never happened, and accusing the Moroccan delegation of “staging” it.

On Saturday, Morocco demanded an apology from Algeria, insisting that “it must assume the consequences of its actions.”