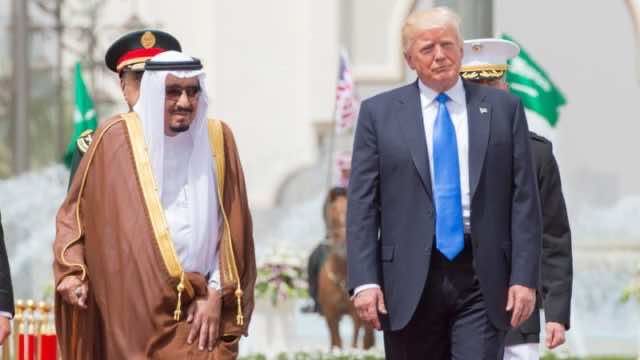 Rabat – With a restrained tone that differed drastically from his caustic presidential campaign and recent executive orders, American President Donald Trump delivered what he characterized as “a message of friendship and hope” in Saudi Arabia on Sunday.

In his first trip abroad in his role as president, Trump told the gathering of Muslim leaders, “I stand before you as a representative of the American people, to deliver a message of friendship and hope. That is why I chose to make my first foreign visit a trip to the heart of the Muslim world, to the nation that serves as custodian of the two holiest sites in the Islamic faith.”

During his speech he also added praise for Islam describing the religion as “one of the world’s great faiths” and characterized the fight against terrorism as “a battle between Good and Evil,” and not “a battle between different faiths, different sects, of different civilizations.”

The only point in his speech that explicitly linked Islam and terrorism was when he told his audience that fighting terrorism meant “honestly confronting the crisis of Islamist extremism and the Islamist terror groups it inspires.” Trump was careful to note that the choice of confronting terrorism was a choice for leaders of the Muslim world to make for themselves: “It is a choice between two futures – and it is a choice America CANNOT make for you. A better future is only possible if your nations drive out the terrorists and extremists.”

Trump’s even and measured tone and his words championing partnership and tolerance were in stark contrast to his campaign trail rhetoric and his recent executive orders as president.

At political rallies and on television, Trump led a divisive campaign that often included inflammatory remarks about Muslims and widely criticized proposals. In November 2015, Trump talked about the possibility of closing mosques in the United Sates on MSNBC telling his TV audience “Some absolute hatred is coming from these areas… the hatred is incredible. It’s embedded. The hatred is beyond belief.”

Later, he discussed the idea of creating a database of all Muslims living in the US and he compared Islam to a sickness. When he accepted the Republican Party’s nomination, his dark speech focused on the “brutal Islamic terrorism” and during his time as president he has continued to use the term “radical Islamic terrorism” despite the advice of many advisors.

With his election as president Trump has worked to turn his campaign promises, including his “Muslim Ban,” into action. He signed an executive order in January issuing a travel ban on all nationals of Iraq, Syria, Iran, Libya, Somalia, Sudan and Yemen, creating chaos across the United States and prompting federal judges to block the order.

In March 2017, Trump unveiled a new executive again attempting to restrict entry to the US from majority Muslim countries. That order was also blocked by in federal court. Despite his staunch defense of these orders and their relevance to the Muslim world, Trump made no mention of them in his speech.

These executive orders and Trump’s campaign rhetoric are in direct conflict with his speech in Saudi Arabia in which he also noted that the Arab world “should not be a place from which refugees flee, but to which newcomers flock.”

While his words were clearly calculated for his audience of Muslim leaders, Trump has not signaled that he will change his approach to refugees coming from Muslim nations or if his time in Saudi Arabia changed his view of the Middle East.

Trump’s speech turned away from the approach of his predecessor, Barack Obama.

During his speech, Trump tried to set himself apart from Obama’s emphasis on human rights and made no mention of democratization or fighting social injustices that persist in much of the Arab world in his speech. Instead he told gathered leaders “We are not here to lecture – we are not here to tell other people how to live, what to do, who to be or how to worship. Instead we are here to offer partnership – based on shared interests and values – to pursue a better future for us all.”

Perhaps the largest contrast between Trump and Obama’s policy positions in the speech was the Iranian Nuclear Deal. While Obama had championed the carefully brokered deal, Trump has been critical since his campaign and repeatedly called it a “bad deal.”

In his remarks in Saudi Arabia, Trump renewed his criticism of Iran explaining that “for decades, Iran has fueled the fires of sectarian conflict and terror.” He added, “until the Iranian regime is willing to be a partner for peace, all nations of conscience must work together to isolate Iran, deny it funding for terrorism, and pray for the day when the Iranian people have the just and righteous government they deserve.”

In the end, Trump’s speech seemed restrained and pragmatic compared to his fiery campaign and the beginning of his presidency. With his first trip abroad, Trump is clearly trying to distance himself from ongoing scandal in Washington and prove himself to be a competent leader on the world stage.

Although he signaled different values than Obama, Trump nonetheless reaffirmed valuable partnerships in the Middle East and has yet to stray too far from prepared remarks or engage in twitter tiffs since beginning his trip.