Rabat - Manchester authorities are announcing that ISIS has claimed that a “soldier of the caliphate” set off the suicide belt at the Manchester Arena Monday night that killed 22 people and injured 59, according to the UK’s Independent. 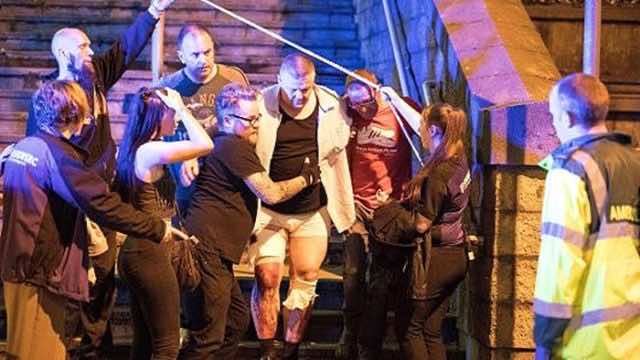 Rabat – Manchester authorities are announcing that ISIS has claimed that a “soldier of the caliphate” set off the suicide belt at the Manchester Arena Monday night that killed 22 people and injured 59, according to the UK’s Independent.

The terrorist group has released statements in multiple languages claiming responsibility for the attack, calling the Ariana Grande concert where the attack took place, “shameless.”

According to the English version of the statement, “With Allah’s grace and support, a soldier of the Khilafah {caliphate} managed to place explosive devices in the midst of the gatherings of the crusaders in the British city of Manchester.”

Although Manchester police have announced the perpetrator dead at the scene, the ISIS statement claimed it was not a suicide attack.  The statement also said that the attack was targeted at “infidels… in response to their transgressions against the lands of the Muslims.”

A claim of responsibility, just hours after the attack occurred, indicates to authorities that the perpetrator may have been in direct contact with ISIS.

Theresa May described the attack as “appalling, sickening.” In a statement to the media May spoke of the struggle “to understand the warped and twisted mind” that could imagine such a heinous crime, let alone execute it.

Police have confirmed that mind belonged to a single, lone male suicide bomber. They believe they know his identity but have not yet confirmed it. They have, however, been able to confirm they have arrested a second man in connection with the attack and are questioning him now.

The Independent has reported Chief Constable of the Greater Manchester Police, Ian Hopkins, saying that investigators believe the attack was the act of a sole perpetrator, using a homemade bomb.

The bombing occurred Monday night, just as singer Ariana Grande finished her concert. Witnesses described hearing a “loud, loud bang” before chaos ensued. Grande escaped injury but issued a statement saying, “Broken. From the bottom of my heart, I am so sorry. I don’t have words.” The 23-year-old singer has suspended the remainder of her tour until further notice.

Her manager, Scooter Braun, posted a statement which read “words cannot express our sorrow for the victims and families harmed in this senseless attack. We mourn the lives of children and loved ones taken by this cowardly act.”

Braun praised the “selfless service” of Manchester first responders who “rushed towards danger to help save lives.”

BBC News is identifying the bombing’s first victim as 18-year-old, Georgina Callander. She was a student of health and social care at Runshaw College in Lancashire.

In a separate incident in the city, the Arndale Shopping Centre was evacuated Tuesday morning following reports of a large bang and a suspicious package in the mall’s food court.

For a time, there was an eerie repeat of Monday night’s desperate flight from the bombed Manchester Arena as people poured out of the mall and into the city streets in panic. Police have arrested a man in connection with this incident but are not releasing any details. No one was harmed and the mall has been reopened.