Rabat - The Ivorian President, Alassane Ouattara received on May 25 Nasser Bourita, Morocco’s Minister of Foreign Affairs and International Cooperation, along with other Moroccan officials in his residence in Cocody Riviera-Golf. 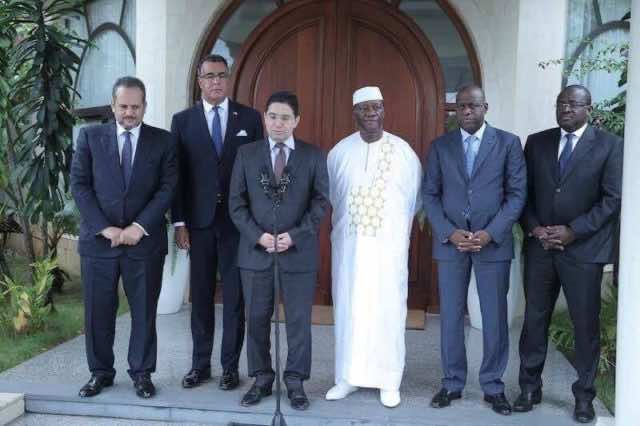 Rabat – The Ivorian President, Alassane Ouattara received on May 25 Nasser Bourita, Morocco’s Minister of Foreign Affairs and International Cooperation, along with other Moroccan officials in his residence in Cocody Riviera-Golf.

Discussions at the meeting revolved around strengthening bilateral relations between Morocco and Côte d’Ivoire as well as other regional issues of common importance to both countries.

The officials also handed the Ivorian President a letter related to Morocco’s interest in joining Economic Community of West African States (ECOWAS). The meeting came few days before the summit of the regional union, scheduled on June 4 in the Liberian capital, Monrovia.

The meeting was also attended by Mohamed Yassine Mansouri, the Director-General of Directorate of Studies and Documentation (DGED), Abdelmalek Kettani, the Ambassador of Morocco in Côte d’Ivoire, Ally Coulibaly, Minister of African Integration and the Ivorian Diaspora Abroad, as well as Fidèle Sarassoro, Minister Director of President Ouattara’s Cabinet.

Last Feburary, Morocco officially informed the current chairman of ECOWAS and President of Liberia, Ellen Johnson, of its interest in joining the bloc as a full member, stressing that it seeks “to crown the strong political, human, historical, religious and economic ties at all levels with ECOWAS member countries.”

ECOWAS was established in May 1975 with the signing the Treaty of Lagos with the aim of promoting economic integration across the countries of West Africa. The union consists of 15 members: Benin, Burkina Faso, Cape Verde, Gambia, Ghana, Ghinea, Guinea-Bissau, Côte d’Ivoire, Mali, Niger, Nigeria, Senegal, Sierra Leone, and Togo.