Rabat - PJD leaders and members of parliament rallied in Casablanca Friday against the ongoing detention of five party members arrested for praising terrorism. 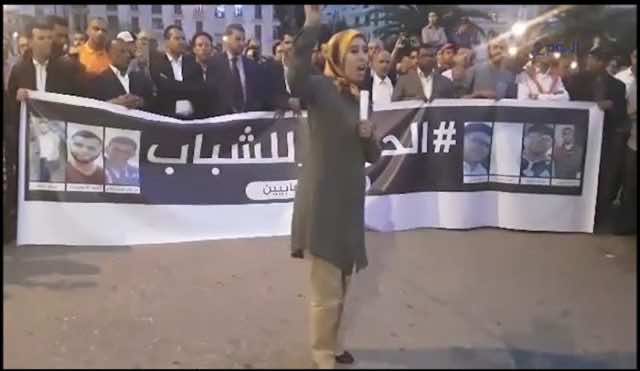 Rabat – PJD leaders and members of parliament rallied in Casablanca Friday against the ongoing detention of five party members arrested for praising terrorism.

The five members of the party’s Youth wing have been on a hunger strike for 10 days. PJD Secretary General Abdelilah Benkirane has called for the detainees to end the strike.

PJD leading members and Members of the Parliament rallied in United Nations’ Square in Casablanca in protest of the ongoing detention of five PJD members after they praised the assassination of the Russian Ambassador to Turkey in a Facebook post in December 2015.

Amina Maalainin, the PJD Member of the Parliament who spoke at the rally said that the arrested members “could have been tried using the Press and Publication Law, which does not contain freedom deprivation sanctions,” but the public prosecution “decided to accuse them of inciting terrorism.”

“The terrorist does not belong to a political party,” pointed out the MP, noting that there is no justification for “keeping those young people under detention at the time when all the guarantees are present for them to be released.”

Maalainin blamed the public prosecution “affiliated with the Ministry of Defense,” the government, and Moroccan state “with all its institutions” for the “scandal” and the detainees’ health state following their 10-day hunger strike.

Amid the slogans chanted by the crowd, the PJD member warned that the detainees might die as a result of the hunger strike and called for attention from human rights organizations and “all those who believe that real reform requires the unification of efforts.”

Maalainin pointed to the “unlawfulness of the arrest” and promised the crowd the arrestees will be released “sooner or later.”

The families of the detainees paid a visit to the General Secretary of the PJD and former Head of Government Abdelilah Benkirane, who asked the detainees to put an end to their hunger strike.

Members of the PJD’s Youth were arrested in late December over Facebook posts deemed to have praised the assassination of Russian ambassador to Turkey by a Turkish police officer.