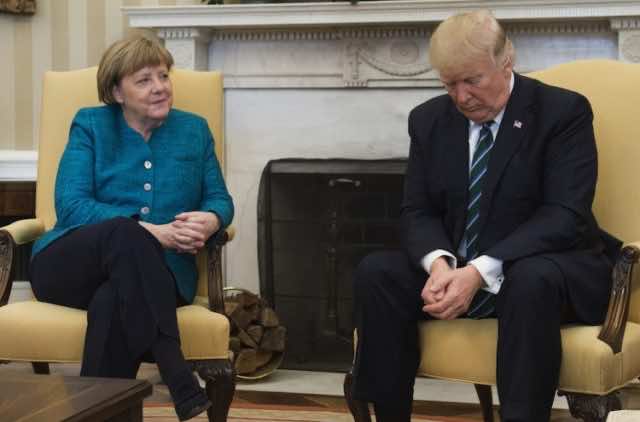 By
Constance Renton
-
Constance graduated from the Television and Radio Broadcasting Program at Canadore College in 1983.
May 30, 2017
Spread the love

Clearly frustrated by Trump’s openly mercurial behaviour during the G7 meetings last week, Merkel chose to give voice to her irritation during a rally in Munich. “We Europeans must really take our destiny into our own hands,” she said.

Though she never uttered Trump’s name, her careful choice of language left no doubt as to the target of her criticism. “… the times in which we can fully count on others,” she said, “are, to a certain extent, over, as I have experienced in the past few days.”

Stung by the public rebuke, Trump fell on his Twitter account, issuing three return volleys at the German Chancellor. In the first he bleated about the US trade deficit with Germany, vowing to end it. “We have a MASSIVE trade deficit with Germany, plus they pay FAR LESS that they should on NATO and military. Very bad for the U.S. This will change.”

Threatening a global trade war with a critically important ally is never advisable but that didn’t stop Trump from launching a second, then a third tweet across the Atlantic. “Russian officials must be laughing at the US and how a lame excuse for why the Dems lost has taken over the Fake News,” he wrote.

The final, non-sequitur tweet came off even more petulant that the first two. “The U.S. Senate should switch to 51 votes, immediately, and get healthcare and TAX CUTS approved, fast & easy. The Dems would do it, no doubt.”

Following Trump’s curiously antagonistic appearance at the G7, an unnamed US official described his behaviour to The Daily Beast as that of a “Drunk American tourist.” The official, who spoke under a guarantee of anonymity, also mentioned the frustration expressed by the other G7 leaders, exasperated by Trump’s arrogant displays.

Far from backing the agreed-upon Paris Agreement on climate change, Trump said instead that the US needed more time to determine whether they were going to abandon it. It was not a heartening stance.

Then there was the infamous shoving aside of the President of Montenegro for a better photo-op position and the visibly tense, over-long handshake between trump and French president, Emmanuel Macron.

Each of these incidents and others displayed a decided lack of diplomacy on the part of the US President and, according to the US official, caused more than one G7 leader to call Trump’s appearance a “disaster.”

As if anticipating Trump’s response to her declaration on Sunday, Merkel also offered him a few carefully chosen words of warning. “Anyone who today puts on national blinkers and no longer has eyes for the world around him is, I’m convinced, ultimately out on a limb.”

Following Merkel’s appearance at the rally in Munich her spokesman, Steffen Seibert, told reports that relations between the US and Germany “are a firm pillar in our foreign and security policy.” At the same time, however, he also reaffirmed Merkel’s right to voice her views on the differences which currently exist between their approaches.

“Never before has there been so much uncertainty about the political course, and so many contradictions in the president’s statements, four months after the inauguration of a new U.S. President.”

“That weakens America,” Hardt continued,” and irritates its partners.”