Rabat - RATP Dev, the world’s fifth largest operator of urban transport, is building a school in Casablanca to train future workers of some of the most prominent transport networks in the Gulf.

By
Chloe Koura
-
Chloé Koura is a final-year student of Arabic and Latin at the University of St Andrews.
Jun 3, 2017
Spread the love

Rabat – RATP Dev, the world’s fifth largest operator of urban transport, is building a school in Casablanca to train future workers of some of the most prominent transport networks in the Gulf.

The School of Sustainable Mobility in Casablanca is going to make qualified resources available for the future bus networks in the Gulf States.

French group, RATP Dev, won the contract to run the service, which will hire more than 3,000 drivers, as well as 200-300 personnel in various fields (operations, maintenance, quality, safety, marketing, sales and IT).

“Morocco, and in particular the metropolis of Casablanca, has many young graduates likely to be attracted to the opportunity of an international career. Those identified for potential future positions in the Gulf States will benefit from: in-depth training across various career paths lasting from one to six months, monitoring of their individual development and acquisition of solid experience with high added value,” RATP Dev revealed in a statement.

Casa Tram will lead recruitment, training and support at a local level, with support from RATP.

According to Oliver Badard, Senior Vice President of RATP Dev for Asia, Middle East and North Africa,“ having recruited and trained 570 workers who operate line 1 of Casablanca’s tramway, Casa Tram has the necessary know-how to identify and support the development of skills of qualified personnel and across the entire range of jobs within transport and its services.”

“We have available all of the tools and expertise necessary for the success of such a project, which, because it enhances skills linked to innovation and sustainable development, fits well with the agenda of Casablanca’s authorities,” added Laurence Battle, President of RATP Dev.

“Our ability to pass on the knowledge of the RATP group, fifth largest operator of urban transport in the world, and to export locally-trained skills abroad, will without doubt contribute to developing Morocco’s attractiveness at an international level,” concluded the President. 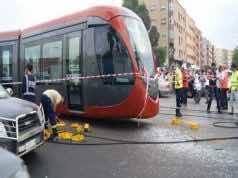