Casablanca - The 5th Avenue where Trump Tower is located has seen a unique gathering of Muslims, Jews and holders of other confessions at the Iftar time. Jewish people gathered around Muslims while praying to protect them. 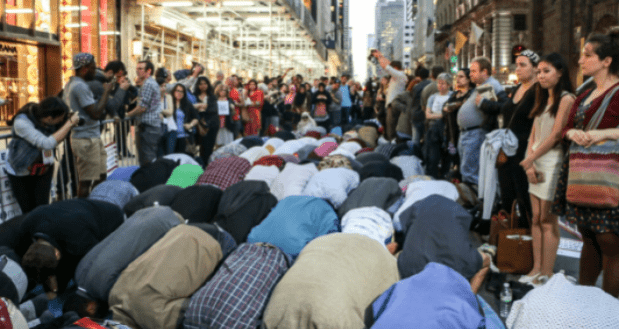 Casablanca – The 5th Avenue where Trump Tower is located has seen a unique gathering of Muslims, Jews and holders of other confessions at the Iftar time. Jewish people gathered around Muslims while praying to protect them.

At Iftar time, Muslims gathered in the 5th Avenue near Trump Tower in New York to protest the Islamophobic policies and rhetoric of the Trump administration on Friday 02. Linda Sarsour, Palestinian-American civil rights militant, was behind the initiative that was launched on Twitter, and sought to bring Muslims together for Iftar at the mentioned location.

Jewish Americans and members of the Jews for Racial & Economic Justice association also joined the protestors and made a circle around the Muslims while they made their Maghrib prayer, in order to protect them.

The event was also in collaboration with New York State Immigrant Action Fund (NYSIAF) and another grassroots of Muslim Americans promoting justice in the US called MPower Change.

Videos and photos of this gathering have gone viral on social media, especially on Twitter, where the hashtag#IftarInTheStreets was used heavily by hundreds of people who appreciated the initiatives.

A video shows Muslims making their prayer in one corner of the avenue, whereas the Jewish militant are forming a circle around them. Another video that was published by Carlene Pinto, a militant in Jews for Racial & Economic Justice association shows the members of the same association feeding the Muslims who had just broken the fast.

The positive Tweets under the hashtag #IftarInTheStreets all celebrated the events and thanked the participants. One Person said: “This is what America was built on. Uplifted to see Jews and Muslims interacting in this way.

Jews for Racial & Economic Justice association said on their Twitter account: “Thank you to who came out tonight. It was an honor to stand with our Muslim family as they observed Iftar tonight.”