Rabat - Morocco has been unanimously elected to join 12 other countries as co-vice presidents at the United Nations Conference on oceans, which runs until June 9 at the UN’s headquarters in New York. 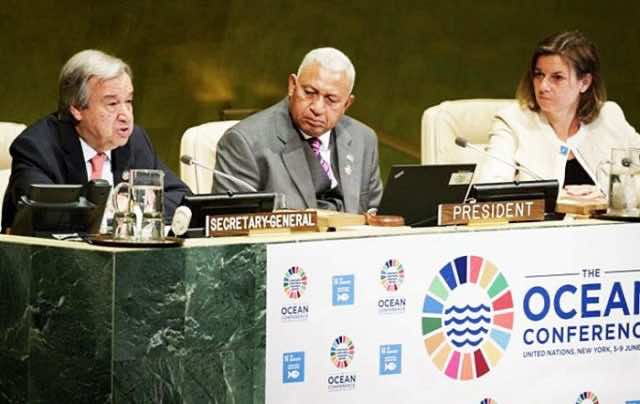 By
Chloe Koura
-
Chloé Koura is a final-year student of Arabic and Latin at the University of St Andrews.
Jun 6, 2017
Spread the love

Rabat – Morocco has been unanimously elected to join 12 other countries as co-vice presidents at the United Nations Conference on oceans, which runs until June 9 at the UN’s headquarters in New York.

All 193 members of the United Nations approved Morocco’s vice presidency, which will help the organisation “reverse the declining health of our oceans for people, the planet and prosperity.”

The Moroccan delegation to the conference is led by Aziz Akhannouch, the Minister of Agriculture, Maritime Fishing, Rural Development, Water and Forests. The minister is joined by Salaheddine Mezouar, president of climate change conference COP22, and Omar Hilale, Morocco’s Permanent Representative to the UN.

Fiji and Sweden were elected the co-presidents of the five-day conference, which aims to “identify ways and means to support the implementation of Sustainable Development Goal 14.” The definition of this goal is to “conserve and sustainably use the oceans, seas and marine resources for sustainable development.”

By the end of the conference, the 193 countries taking part will announce a “call for action” which will tackle issues facing the oceans and other water sources. The conference also coincides with World Oceans Day on Thursday, June 8.

Saving the World Through Its Oceans

Secretary-General Antonio Guterres began the conference saying that the seas were “under threat as never before.” Guterres referenced a report by the 2016 World Economic Forum, which put forward that there was more than 150 million tons of plastic in the ocean. The report also said that if the world continues to use and dispose of plastic at its current rate, by 2050 there will be more plastic than fish in terms of weight in the sea.

Following the US’ decision to leave the Paris Agreement, Bolivian President Evo Morales criticised the nation, saying she was the “main threat to Mother Earth.” Morales continued that by removing itself from the climate change agreement, the USA was “denying science, turning your backs on multilateralism and attempting to deny a future to upcoming generations.”

Morales also criticised his country’s neighbour Chile, who he claimed was not giving landlocked Bolivia its rightful access to the ocean – the 1904 Treaty of Peace and Friendship states that Chile must let Bolivia enter for trade access. Morales stated that “the broad and free commercial transit that Chile is obliged to provide us suffers from constant interruptions through strikes, stoppages for various reasons, but above all because our access has become a profitable business for private companies that benefit from the port of monopolies.”

Zimbabwean President Robert Mugabe used the conference to request an end to the sanctions imposed on his landlocked country in 2001. “The effects of climate change are not discriminatory, so please down with your sanctions. My country is committed to implementing [sustainable development goals] and will do so within the means available to it.” Sanctions have been in place since 2001 due to allegations of human rights abuses and vote-rigging, which have been disputed by Mugabe.

The conference has called for voluntary commitments to improve the health of the oceans, and the conference’s spokesman Damian Cardona has said that at least 730 commitments had been made thus far. These commitments will help the UN reach the targets of its 2030 Agenda, of which one is to protect the oceans in order to benefit current and future generations.

Guterres concluded that “we must put aside short-term national gain, to prevent long-term global catastrophe,” while General Assemble President Peter Thompson said “the time has come for us to correct our wrongful ways.”