Rabat - On the 56th anniversary of King Mohammed V’s death, members of the three monotheistic religions met in Rabat on Thursday to celebrate the tolerance and peace that the late King encouraged.

By
Chloe Koura
-
Chloé Koura is a final-year student of Arabic and Latin at the University of St Andrews.
Jun 10, 2017
Spread the love

Rabat – On the 56th anniversary of King Mohammed V’s death, members of the three monotheistic religions met in Rabat on Thursday to celebrate the tolerance and peace that the late King encouraged.

The Forum for Tolerance and Peace was organised as an initiative of the Mediterranean Centre for Peace and Dialogue Between Cultures and the Moulay Abdesalam Association for Development and Solidarity. Thursday’s conference was an opportunity to remember the efforts that Mohammed V made to liberate Morocco from the both French and Spanish colonisation.

After the forum’s participants visited the mausoleum of King Mohammed V to pay respect to the spirit of Morocco’s father, they signed a plaque entitled “The Dove of Peace and Tolerance”. This plaque will be given to Egypt’s Ambassador to Morocco as a token of solidarity, following the recent attack on Coptic Christians in the country.

The shared Iftar expressed friendship, tolerance, sharing and respect for each other, irrespective of the other’s faith. Mohamed Abidou, the director of the Mediterranean Centre told Moroccan Press Agency (MAP) that sharing Iftar is “the best symbol of religious tolerance and respect that Moroccans can offer.”

During the reception, numerous veterans of the resistance movement including Mustapha El Ktiri, High Commissioner for former Resistance and former members of the Liberation Army (HCAR) were praised for the service they gave to their country.

Abidou also told Moroccan Press Agency (MAP) that the date of meeting on the anniversary of King Mohammed V’s death was significant and intentional. He continued that the late King “sacrificed the throne for the freedom of the kingdom and faced colonialism and Vichy fascism in order to protect Jewish people.”

El Ktiri remarked that the meeting reflected values of tolerance, dialogue and openness between different civilisations, religions and cultures. The high commissioner also recognised the importance of the event falling during the Muslim holy month of Ramadan and stated that those who commit violent crimes, like the killing of Egyptian Coptic Christians, are terrorists who have nothing to do with Islam, a religion of peace and tolerance.

The forum ended with a concert by Larache’s Andalusian music orchestra and featured participation from artist Abdesalam Sefiani. 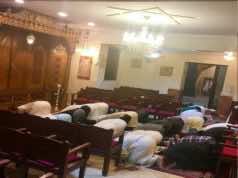