Rabat - 33 Moroccan peacekeepers have been killed and 220 have been injured since the 1960s, according to Chakib Rayss, a colonel in the Royal Armed Forces. 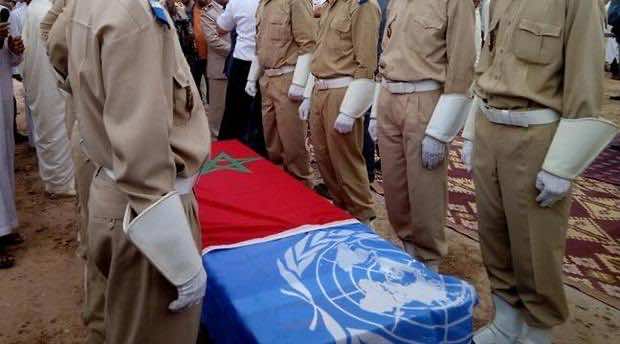 Rabat – 33 Moroccan peacekeepers have been killed and 220 have been injured since the 1960s, according to Chakib Rayss, a colonel in the Royal Armed Forces.

While giving a presentation entitled “Morocco and Peacekeeping Operations” for the Ministry of Foreign Affairs’ celebration of Africa Day, Rayss said that “these tragic events do not prevent Morocco from continuing its participation in Africa peacekeeping operations,” asserting Morocco’s commitment to international law and establishment of peace.

60,000 Moroccan soldiers have contributed to eight of 71 international operations since 1948, ranking Morocco 15th in the world and 9th in Africa, according to United Nations’ statistics.

Rayss continued that 1600 Moroccan soldiers are currently deployed across Africa (excluding Morocco), before adding that Moroccan soldiers have participated in three warzones in the continent: Democratic Republic of the Congo, Somalia and Central African Republic (CAR). He noted that the number of soldiers reached 4000 in the Congo, whilst 1250 were based in Somalia in 1992.

The colonel continued that Morocco has also contributed logistics, noting that the country has built 15 hospitals and provided approximately 100 million medical supplies in Africa’s zones of war.

The 15 hospitals established in Africa include a hospital in Mogadishu that has been staffed by 150 Moroccan doctors and 200 nurses over a period of 16 months.

During the last few years, Moroccan peacekeepers have been targeted in the CAR.

In January 2017, two Moroccans serving in the Moroccan Royal Armed Forces (FAR) squad of the United Nations Stabilization Mission in the Central African Republic (MINUSCA) were killed in an armed attack near the town of Bria, northeast of the capital Bangui.

Last May, a group of armed assailants ambushed the UN-MINUSCA convoy. The fatal attack left a group of Cambodians and the two Moroccan peacekeepers dead.

MINUSCA, established in 2014 in response to the country’s ongoing civil war, has deployed more than 12,000 troops to protect civilians from the repercussions of violence between Christian and Muslim sects.