Rabat - The ongoing protests in northern Morocco started almost eight months ago, but they have their origin in nearly a century of violent repression by the state. 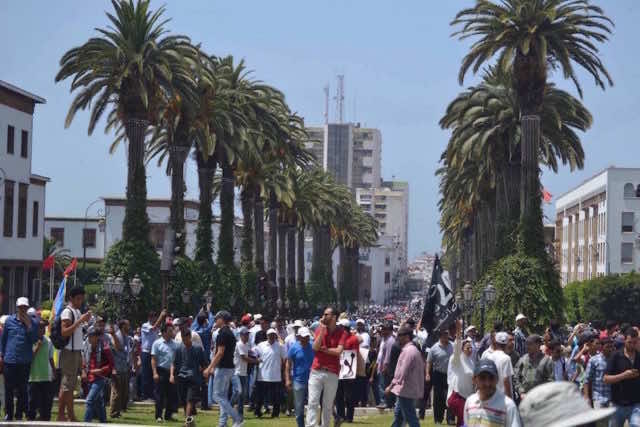 Rabat – The ongoing protests in northern Morocco started almost eight months ago, but they have their origin in nearly a century of violent repression by the state.

The Rif has, in spite of itself, got involved into a peaceful revolt since the death of the fishmonger Mohcine Fikri at the end of October 2016, a dramatic situation that seems to have no outcome at the moment.

Worse, there is an escalation of tension from both the Hirak (uprising) movement and the government. Nasser Zafzafi, the icon of the popular Rifi protest movement, clumsily attacked the sacredness and the sanctity of the Muslim religion in a very conservative country, and the government hastily proceeded to arrest him along with his circle of lieutenants and decision-makers.

In this regard, Kenza Oulmlil, an assistant Professor in Communication and Gender at Al Akhawayn University in Ifrane, Morocco, argues in Al Jazeera electronic portal publication on June 6, 2017:

“As well as being accused of ‘obstructing the freedom of worship’, Zefzafi was also criticized for the lack of structure and eloquence in his intervention at the mosque. The protest leader, who is not a highly educated person, was accused of being a misogynist after making comparisons between the political corruption in the country and the ‘corrupt mores of women’, criticizing the way women dress and even using language that implies men’s ‘ownership’ of women. This is indeed a worrying discourse, especially for women who are concerned about not losing control over their bodies. But the Hirak Movement recently sent out a more egalitarian message by including a woman, Nawel Ben Aissa, among the leaders of a protest following Zefzafi’s arrest.”

It seems that on both sides impulsiveness has largely prevailed over wisdom and common sense, and as a result the gap will expand further. Yet, a peaceful and responsible dialogue could have readily resolved the conflict, bearing in mind that the government has promised to put USD 1 billion on the table, a tremendous amount, for the much-needed development of the city and its surroundings. In short, no city or region of Morocco has had the chance of such governmental generosity at once and as quickly. It is a boon for the Rif, if the promise is respected, of course.

But, however, it must be said openly that the Rif has been suffering stoically and in silence for over a century. Indeed, since the beginning of the last century, it has suffered greatly from the yoke of harsh French and Spanish colonialism and since the independence in 1956 from the contempt of the central state, without mentioning the harshness of nature. All this can seen on the face of the Rifi people, who are victims of abject poverty and horrendous injustice.

The Rif as a region and as a cultural entity has been confronted, for a long period of time with a range of handicaps both natural and human:

The Rif is a predominantly mountainous region – very steep and therefore generally rugged. It has few plains. The slopes of the soil are often very strong and with an inclination of more than 50 percent. The soils are not very permeable and are thus very sensitive to erosion. Although it has access to an important rainfall, in wet years it is arid and badly lacking water most of the time. The Rif in its entirety is subject to devastating and continuous erosion.

In the popular imagination of the Moroccans, the Rifis are at the same time very brave and very honest people, responsible heads of families and loyal spouses. They are known by the name of shluH al-‘azz, the valorous Amazighs / Berbers.

That said, however the Rifi is seen and stereotyped as a shady and unfaithful being who can change his mind and camp quickly:

– Rifi gheddar u qattal (the Rifi is sanguinary and incapable of fidelity);

– Rifi ighadrek, ighadrek (the Rifi will be unfaithful to you sooner or later), etc.

These strange stereotypes about the Rifi individual are the result of his pugnacity and innate sense of survival in an inhospitable geographical and human environment. His face, cicatrized by the hardships life, gives him the impression of being a patient sufferer and untrustworthy man with a natural propensity to fight and aggression.

The Rif is a basically poor region.; Mountainous and arid, it is therefore unable to feed its own people. In the 1930s the Rifis immigrated seasonally, en masse, to French Algeria to work in agriculture. They called this movement “shareq” (“migration to the east”). In the 1950s, they crossed, this time, the Mediterranean to go to Europe, which was in full reconstruction after the Second World War, thanks to the American generosity of the Marshall Plan. They settled mainly in Holland and Belgium but also in Spain, France, Germany and the countries of Scandinavia. Thanks to the hard earned money they fed their families, built beautiful houses, and invested in businesses and real estate in their area tribal areas and elsewhere in Morocco.

But in the 1980s, the Europeans closed their borders, and the sons of the Rif turned to education with the hope of getting a job to take care of their families and make their living. Diplomas in hand, they were confronted to the harsh reality of a labor market selective and not generous, in the least. Their survival hopes were bashed on the rocks of ferocious liberalism. In the chairs of cafes they meditated at length on better days while organizing themselves in associations of defense of Amazigh/Berber culture and human rights. Soon Al Hoceima became the Moroccan capital of human rights and contestation.

To calm the region, the Makhzen proceeded clumsily to the co-optation of some local elites, but soon these elites lost their political “virginity” and credibility were disavowed by the Rifi people, if not socially banished.

The armed uprising of the Rif of 1958-59 was not directed against the monarchy but rather against the Istiqlal Party, which wanted to seize power and establish the single party political system, as was happening in several other Arab countries. The would be-king Hassan II, at the time crown prince Moulay Hassan, anxious to take the place of the king, saw in this uprising a golden opportunity to assert his political and military authority and get rid of both the disturbing Rif movements and the usurper Istiqlal political party. Against the advice of his father Mohammed V, who was instead inclined to political dialogue and social intermediation, Moulay Hassan crushed the Rif uprising militarily in blood.

At the end of January 1959, the uprising was suppressed by a military force of 30,000 men commanded by crown prince Moulay Hassan and placed under the orders of General Oufkir. After the end of the uprising, the Rif was subjected to a military regime for several years. The most ruinous legacy of this uprising was the complete neglect and marginalization of the region by the Moroccan authorities in the following decades.

This marginalization was to become even more pronounced after the popular uprising of 1984, which was also repressed in blood because, the Rif was still militarized and, for Hassan II, the region was still openly opposed to the monarchy and the state.Upon his accession to the throne in 1999, Mohammed VI begun a process of reconciliation with the Rif, making several trips to Al Hoceima and Nador and inaugurating a number of large-scale development projects, but not sufficiently meeting the urgent needs of the population: employment and dignity. The good intentions of King Mohammed VI for the development of the Rif were totally exasperated by administrative delays, bureaucratic sluggishness, corruption of elected officials and poor choice of local elites.