Rabat - As the Rif crisis in Al Hoceima continues,  thousands of Moroccans have staged a large-scale march in Rabat on Sunday to support Rif protests by calling for the release of detained activists and denouncing the series of ongoing arrests of activists. 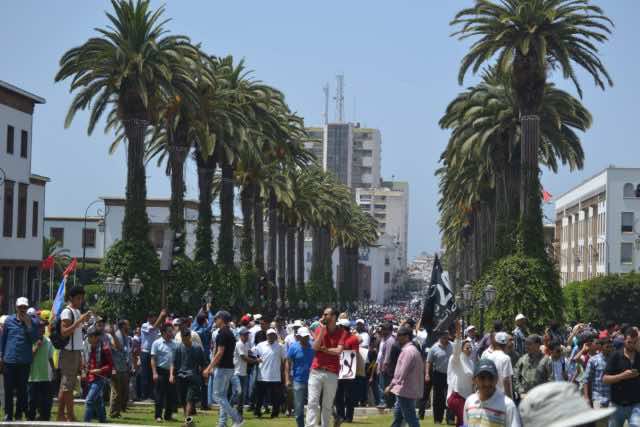 Rabat – As the Rif crisis in Al Hoceima continues,  thousands of Moroccans have staged a large-scale march in Rabat on Sunday to support Rif protests by calling for the release of detained activists and denouncing the series of ongoing arrests of activists.

Led by Amazigh associations, the February 20 Movement and illegal Islamist organization Al Adl Wa Ilhsan, the march started at 12 p.m. from Bab El Hed square and headed to parliament, located in the Avenue of Mohammed VI.

The protesters waved banners carrying photos of the detained activists, like Nasser Zafzafi and Selima “Silya” Ziani, and chanted phrases like “the Government is failure, Al Makhzen is failure.”

This slogan in particular called for the release of detainees and insisted authorities listen to their demands.

Upon arriving in front of the parliament building, the protesters chanted, “the people want to bring down the militarization,” and “one homeland, one people, all against humiliation.”

In the presence of the detainees’ families, most notably the parents of arrested leading activist Nasser Zafzafi who were in the forefront of the march, the protesters shouted, “we are all Zafzafi,” and “people need the release of the detainees.”

In the middle of the march, protesters began to sing slogans formerly chanted by the February 20 Movement in 2011 amid the so-called Arab Spring, like “Freedom, Dignity, Social Justice.”

The march is the first large national one in Morocco since the beginning of the popular protest movement in Al Hoceima October, following the death of fishmonger Mouhcine Fikri who was fatally crushed in a garbage compactor.

Sunday’s march saw the participation of women alongside Islamists, leftists and Amazigh activists. The authorities said that the number of the protesters reached 15,000 – while the organizers have not issued any figure.

The tension of the protest movement has grown over the past few weeks following the arrest of the movement’s leader, Zafzafi. Alongside other activists, Zafzafi was taken into custody last Monday after interrupting a Friday sermon he felt was “unfairly denouncing the protest movement.

Zafzafi has been charged with “obstructing the right of worship” and “undermining state security.” He has been placed in custody with six other detainees in Casablanca’s Oukacha prison.