Rabat - Sustainable economic development will be at the heart of the G-20 Africa conference scheduled from June 12-13 in Berlin, as part of Angela Merkel’s efforts to boost German-African economic partnership by providing an additional investment of EUR 300 million.

By
Chaima Lahsini
-
Chaima Lahsini is freelance journalist and activist with the Al-Fam collective in Rabat.
Jun 13, 2017
Spread the love

Rabat – Sustainable economic development will be at the heart of the G-20 Africa conference scheduled from June 12-13 in Berlin, as part of Angela Merkel’s efforts to boost German-African economic partnership by providing an additional investment of EUR 300 million.

German Chancellor, Angela Merkel, will receive a number of African leaders on Monday and Tuesday in Berlin. Germany wants to seize the opportunity of its presidency of the G20 to attract investment to Africa, which is seen as a necessary step to reduce migration to Europe.

The objective of the “G20 Africa Partnership, Investing in a Common Future” conference is “to strengthen cooperation for sustainable economic development of African states,” said a spokesperson for the Chancellor.

Monday’s summit crowns a series of international initiatives and programs aimed at promoting investment in the African continent. Since the end of 2016, the German Minister of Finance Wolfgang Schäuble, stressed that Africa plays a crucial role for the global economy, both in terms of its potential and the risks it represents. For Schauble, the continent should be a space of cooperation, not competition.

Back in March, during the G20 Finance summit in Baden-Baden, the biggest financiers of the world’s major economies invited their counterparts from Côte d’Ivoire, Morocco, Rwanda and Tunisia to join them in setting up this partnership known as “Compact with Africa.”

Less than a month away from the G20 in Hamburg and, in an approach that is open to “all African countries,” the leaders of Ghana, Ethiopia, Niger, Egypt and Mali, will be in attendance at the two-day conference in Berlin. Joining them will be the international financial institutions which intend to provide technical support to the countries for their reforms.

“We must create conditions in the south of the Sahara so that people can evolve, train and generate value for themselves and their families,” Christine Lagarde, head of the International Monetary Fund, told the daily Handelsblatt.

Until now, South Africa was the only country on the continent to be part of the G20. African economic development has never really been on the agenda of the world’s major economies.

On Monday, the German Development Ministry announced of an additional EUR 300 million in aid to countries notably anxious to fight corruption. Merkel’s priority for Africa is not an aid plan with money banging and stumbling, but “an opportunity to attract investment, profits and jobs,” explained an official from the German Ministry of Finance. It is believed that political support from the G20 can make these countries more attractive to private finance.

More than one hundred investors are expected Monday and Tuesday in Berlin.

Shifting Focus to Africa in Hopes of Reducing Immigration

While the issue of tens of thousands of migrants heading to Europe to flee poverty and conflict is not mentioned on the front line, it is a serious matter for Germany, which has welcomed more than one million asylum-seekers in recent years, mainly from Syria, Iraq and Afghanistan.

The issue is all the more pressing considering the failure of the European Union to stop the influx of migrants, many of whom are sub-Saharans, who make their way to the Italian coast from unstable Libya. For Merkel, one of the most efficient solutions to stemming these flows is to tackle the root causes of migration by offering prospects to the populations within their own countries.

The African population is growing rapidly. By the year 2050, about 2.5 billion people will live on the continent, almost twice the current number. By 2030, about 440 million people will be looking for work. The African economy must grow if it is to welcome this boom. In many countries, however, existing conditions make it difficult to achieve a stable livelihood if things do not change.

During a visit to Mali and Niger in 2016, transit countries for many migrants, and in Ethiopia, where the African Union is headquartered, the Chancellor said that “Africa’s well-being is in the interest of Germany.”

“It is decisive that peace, well-being, development and growth are built in the countries of origin of migrants,” Lagarde told Handelsblatt.

For NGO One, the German initiative in the framework of the G20 is to be welcomed, but “the proposals currently on the table are insufficient” because they’re “too focused on the strongest states and too concentrated on private investments.”

On Saturday, about a thousand opponents of globalization marched in the German capital clamoring “Africa is not for sale” and criticizing the Berlin meeting as a new attempt to get hold of African resources.

“To offer future prospects to the 450 million young Africans who will arrive in the labor market over the next 20 years, African states must reform and invest, but the G20 must also increase its public aid for the sectors Key as education,” states the NGO.

According to its latest report, in the next 50 years, the African continent will have more young people than all the G20 countries combined.

Other opponents criticized the politicians, feeling they will not really help the local population, but will focus, rather, on closing the western states by strengthening the immigration measures and the closing the refugee roads. 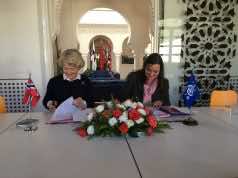