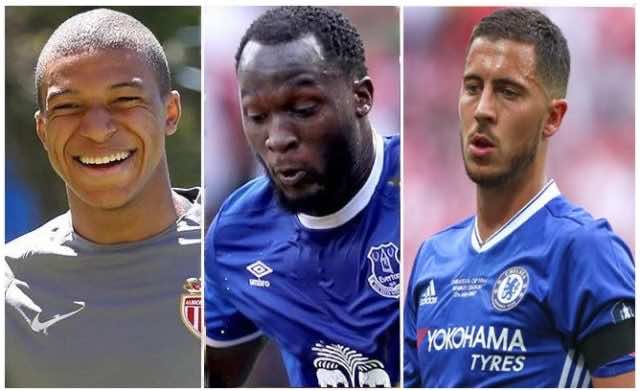 Rabat – The usual rounds of summer transfer rumors have officially hit and it seems that this year might be one of the most expensive on record – even after football’s most expensive ever purchase by Manchester United of Paul Pogba for GBP 89.3 million (EUR 105 million) last year. Here is a breakdown of some key players who may soon be wearing different uniforms in the Champions League.

The year’s most sought after star, the 18-year-old French national, seems set to be sold by Monaco after he helped them win Ligue 1 this season, breaking a 17-year drought.

He will not be cheap however, as Monaco, which plays in the French league, has publicly stated that a bid of less than GBP 100 million will not be considered.  Reportedly both Arsenal and Real Madrid have made bids of over GBP 87 million, although a price closer to GBP 118.3 million will likely be necessary to pry the new superstar from Monaco.

Arsenal manager Arsène Wenger has made clear his desire to sign his fellow Frenchman, but Real Madrid, managed by Zinedine Zidane, seems to be the frontrunner in the race. Zidane’s team has offered close to what Monaco wants and has agreed to loan Mbappe back to Monaco for next season to improve his chances of playing for the French national team in the lead-up to the 2018 World Cup.

Liverpool, Manchester United, Paris St-Germain, and Chelsea are also rumored to be in the running for the breakout star.

Chelsea’s star midfielder has been rumored to move away from The Blues. The Belgian midfielder, who sometimes play winger, was an integral part of the team that finished first in the Premier League table this year, after a disappointing 10th place finish in the 2015-2016 campaign.

At the end of this season, Hazard was voted part of the PFA team of the year. Across his five seasons at Chelsea, he has received the honor four times. This year he earned it despite missing a month of play caused by an ankle injury.

Chelsea is reportedly willing to sell him to Real Madrid for the right price. Real Madrid president Florentino Perez seeks re-election from the board, and to secure it he should sign a big-name player.

Rumors say Perez is prepared to offer Chelsea in excess of GBP 90 million.

Chelsea does not yet have a replacement should they sell Hazard, but it is alleged they are prepared to offer GBP 45 million for Napoli winger Lorenzo Isigne.

The Everton striker is almost definitely leaving his club, with Chelsea alleged to have offered GBP 70 million (EUR 79 million) for him. The Belgian star played for Chelsea in 2011, however he only played in 10 matches before going on back-to-back loan spells to West Bromwich Albion and Everton is 2012 and 2013 respectively. He became a permanent member of the Everton team in 2014, and since then has been an absolute star.

Since leaving Chelsea, Lukaku has turned into a goal-scoring machine. In 110 appearances, he has netted 53 goals, culminating in this year’s campaign that saw him score 25 goals in 37 matches, second in the Premier League to Tottenham’s Harry Kane.

Lukaku himself has stated to the British press that, “I’m staying calm and we have an agreement with the club as well. We stay calm and at least we have a direction where we want to go.” He did not name “the club” but it has been heavily speculated to be Chelsea.

With their soon-to-be announced purchase of Lukaku, Chelsea needs to find a place for its current striker Diego Costa. Costa has had a rough time at Stamford Bridge, having described his relationship with manager Antonio Conte as “bad,” and having been openly told that he has no place in Chelsea going forward.

The most interesting and potentially disastrous transfer rumors involve Arsenal’s Alexis Sanchez. If he moves, he will likely go to Manchester City or FC Bayern Munich.

Wenger, Sanchez’ embattled manager, is at a crossroad. Premier League rival, Manchester City, has apparently tendered an offer in excess of GBP 50 million, while Bayern has only offered GBP 40 million.

It seems unlikely Sanchez would go to Bayern given the German club is unwilling to agree to his wage stipulations. By contrast, City has reportedly agreed to make the footballer the highest paid player in the Premier League, at over GBP 400,000 a week.

Furthermore, with only one year left on his contract, Sanchez can leave the club next year, meaning that if Arsenal fails to find a suitable deal or replacement this year, the club will have no ability to dictate where the star forward goes. Arsenal fans are eager for Sanchez to stay as he is considered by many to be the club’s most talented player, but he demands more money than the GBP 260,000 a week that Arsenal is willing to offer.

With all this in mind, Arsenal has been put into a perilous situation, with an unhappy star on an expiring contract and suitors who smell blood in the water. None of the options look good, but the least detrimental option for the club is to hope that Sanchez accepts Bayern’s offer and both parties can achieve a compromise. The sooner this happens, the sooner Arsenal can formally make a bid for rumored replacement Olympique Lyonnais striker Alexandre Lacazaette.