Rabat - French President Emmanuel Macron has thanked King Mohammed VI on his Facebook page for a warm welcome to his visit in Morocco, and has posted a photo of the two leaders sharing iftar (breaking of the fast). 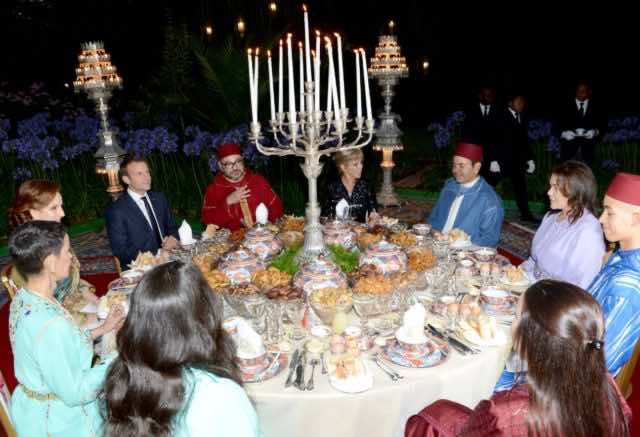 By
Chloe Koura
-
Chloé Koura is a final-year student of Arabic and Latin at the University of St Andrews.
Jun 15, 2017
Spread the love

Rabat – French President Emmanuel Macron has thanked King Mohammed VI on his Facebook page for a warm welcome to his visit in Morocco, and has posted a photo of the two leaders sharing iftar (breaking of the fast).

Thanking the King for his warm and generous welcome, Macron’s post garnered over 26,000 “likes” within an hour of its publication.

Macron and his wife Brigitte arrived at Rabat-Salé airport on Wednesday June 14, in his first trip outside of the European Union since he assumed presidency on May 7.

The two-day trip combined business and friendship, and soon after the couple’s arrival to the Kingdom, they went to the royal palace for talks.

In a later press briefing, Macron highlighted the importance of security and necessity that the two nations share intelligence.

When questioned about the protests in the Rif region, Macron stated he had “no right to make a judgement on a matter of domestic policy”, but said the King found them “normal and legitimate” given demonstrating is a right protected by the constitution.

Macron and the King also discussed the Qatar-Saudi Arabia dispute, a crisis that Morocco had offered to mediate and that France is eager to help solve.

On Wednesday, the first lady visited the Picasso exhibition in Rabat with Princesses Lalla Salma and LallaOumKeltoum.

The French couple shared an iftar meal of traditional Moroccan foods with the King and his family on Wednesday evening. Crown Prince Moulay El Hassan, Prince MoulayRachid, Princess Lalla Salma and Princess LallaOumKeltoum were in attendance.

Macron also announced on Wednesday that his visit to Morocco showed “the kinship of the relations between our two countries, based on a common vision and a desire to pursue our joint interests not only in Morocco but also in the region and in Africa.”

President Macron left Morocco on the morning of Thursday June 15.