Morocco World News
Home News International News Problem of Western Media: Why Has It Taken So Long to Call...

Rabat - A 47-year old man drove a van into a group of Muslims when they were leaving a mosque in London saying “I want to kill all Muslims,” so why have British authorities and media taken so long to call the “incident” what it really is: a terror attack? 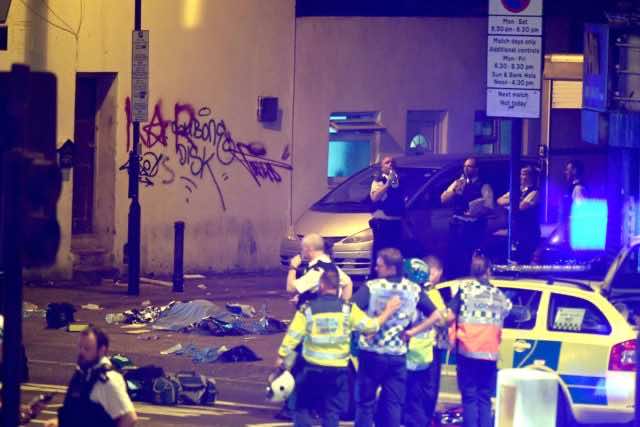 By
Chloe Koura
-
Chloé Koura is a final-year student of Arabic and Latin at the University of St Andrews.
Jun 19, 2017
Spread the love

Rabat – A 47-year old man drove a van into a group of Muslims when they were leaving a mosque in London saying “I want to kill all Muslims,” so why have British authorities and media taken so long to call the “incident” what it really is: a terror attack?

In the early hours of Monday, June 19, a man identified locally as Darren Osborne targeted Muslims leaving Finsbury Park mosque in London, as they left after performing the Tarawih prayer. Osborne drove a van into a group of pedestrians as they helped an elderly man who had collapsed – this man died and ten others were injured. Upon being restrained by locals, witnesses claimed he shouted about killing Muslims. The father-of-four is alleged to have said, “I did the job… I done my bit,” as well as ”I’d do it again.”

The man has been arrested on suspicion of murder and has been taken to hospital “as a precaution” announced Metropolitan Police, who added he would “also be subject of a mental health assessment in due course.” Metropolitan Police deputy assistant commissioner Neil Basu said the attack had “all the hallmarks of terrorism.”

Police Commissioner Cressida Dick has also stated it was “quite clearly an attack on Muslims,” while Scotland Yard confirmed they would reassess the security of mosques during Ramadan.

British newspaper headlines have tried to downplay and even justify the attacks. Sky News reported the attack as “Vehicle Collides with Pedestrians in London,” while The Daily Mail chose “White van driver injures at least 10 people after ploughing into a crowd outside London’s Finsbury Park mosque where hate cleric Abu Hamza once preached as Muslims finish their evening prayers.” 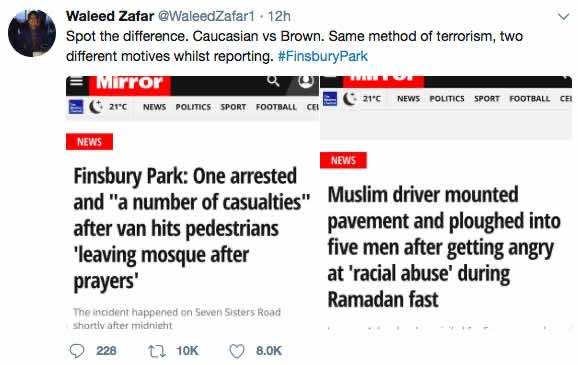 Twitter user Waleed Zafar compared how right-wing daily newspaper Daily Mirror used two different explanations to describe the same form of terrorism. Despite the time difference used when publishing these headlines, the difference between “hits” and “ploughed” is strong.

The Anti-Defamation League (ADL) has defined terror as “a pre-planned act or attempted act of significant violence by one or more non-state actors in order to further an ideological, social or religious cause, or to harm perceived opponents of such causes.”  However, the coverage of attacks like that of the London mosque demonstrate that certain media outlets only seem to apply the word ‘terrorist’ to people of a certain faith.

When an Islamic extremist makes an attack in Europe or North America, Muslim groups hastily condemn the action and help support victims. Following the bombing in at an Ariana Grande concert in Manchester on May 22, Muslim Engagement and Development raised over GBP 16,000. By contrast, when Muslims are attacked by a white British non-Muslim, white British groups are not required to condemn attacks nor assure that the views of the particular white male are representative of the wider white British community. British government media ask Muslims to do more to tackle extremism within their communities, but fail to ask the same of white British communities.

Comments on right-wing The Daily Mail’s online publication of their article about the attack described it as “tit for tat” behaviour that was bound to happen “sooner rather than later.” The leading comment ‘liked’ by almost 11,000 people said “this [attack] is what happens when Government refuse to address problems. It was only a matter of time before this happened because unstable members of the public want retribution and dont [sic] feel the Government will get them it. Will be interesting to see what happens now though, i [sic] imagine Corbyn [Labour Party leader] will be happy with an attack he can actually be outraged about now though.”

Last week, American Christian minister Robert Doggart was sentenced to 20 years in prison for plotting to destroy a New York mosque and execute anybody who might prohibit his attempt. Despite his clear racist motivation, he was not charged with plotting an act of terrorism, and the case’s judge said to Doggart “you are not a monster…in many respects, you lived a life of honor.” People of power praising the terrorist actions of racists not only justifies racist hatred, but actively encourages it.

When a non-Muslim commits an act of terror, authorities are quick to question their mental health, often despite clear political and religious motivations. Far-right white supremacist Thomas Mair stabbed and shot Labour MP Jo Cox, yet despite saying “this is for Britain” and “Britain first”, he was made to attend psychiatric examinations, which later found no evidence that poor mental health was the cause of his actions.

Moreover he was consistently described by British press as “nice” but a “loner”, and even after his conviction, British newspaper The Sun called him politically motivated, using quotation marks to label him a “terrorist,” thus suggesting otherwise. The usage of sympathetic language shows the double standards and clear bias of Western media, insinuating his hatred is not of the same severity as non-white Islamic extremists.

Following the attack on the North London mosque on Monday, Brendan Cox, the widowed husband of murdered Jo Cox, has stated that all acts of terrorism must be treated equally. On Radio 4’s Today programme, he announced: “Far right fascists and Islamist terrorists are driven by same hatred of difference, same ideology of supremacy and use same tactics. We’ll defeat both.”

Cox continued that “when Islamist terrorists attack we rightly seek out hate preachers who spur them on. We must do the same to those who peddle Islamophobia.”