Rabat - Overcrowded classrooms, an acute shortage of teachers and schools, a high dropout rate. The Court of Audits’ latest report on the management of the 2016-2017 school year reveals the dark reality of Morocco’s National Education system. 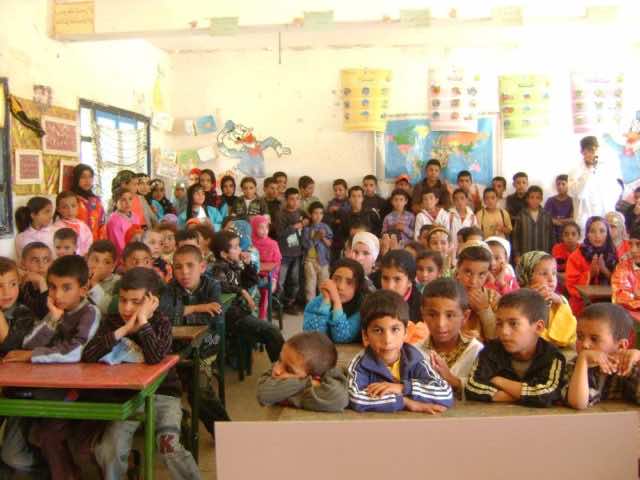 By
Chaima Lahsini
-
Chaima Lahsini is freelance journalist and activist with the Al-Fam collective in Rabat.
Jun 19, 2017
Spread the love

Rabat – Overcrowded classrooms, an acute shortage of teachers and schools, a high dropout rate. The Court of Audits’ latest report on the management of the 2016-2017 school year reveals the dark reality of Morocco’s National Education system.

The verdict is a lethal one. The Court of Audits considers that the last school year was marked by several dysfunctions: “Several shortcomings have compromised the normal conditions of schooling, mainly the lack of teachers.”

The shortage of teachers, estimated at 16,700 in 2016, is one of the main challenges faced by national education. While the ministry in charge tried to fill this human resource gap at the beginning of the last school year by recruiting several contract teachers at the very last minute, “this situation did not fail to disrupt the conditions of the new school year,” points out the Court.

The lack of human resources had, in fact, direct repercussions on the education system as a whole. By July 2016, Morocco’s school system had an overall deficit of 16,700 teachers. This deficit had negatively impacted the progress of schooling, which is, according to the Court, a flagrant reality that can be observed by visiting schools.

This shortage of teachers manifests itself in numerous shortcomings which call into questioning the general quality of education. One of the main consequences of this shortage is the increase of overcrowded classrooms.

During the 2016-2017 period, the Court’s report shows that over 2 million pupils pursued their studies in overcrowded classrooms. The Ministry retains a congestion threshold of over 40 students per class, which is double what the countries of the OECD allow.

Other consequences include the reduction and sometimes the suspension of the teaching of some subjects, or the teaching of certain subjects by contractors, or trainees who lack sufficient prior training.

Another dysfunction recorded by the Court of Audits is the poor optimization of schools and classrooms and their generallypoor condition. More than 1,000 schools and 9,000 classrooms were closed last year. 7,000 teaching rooms have been used for other purposes, such as libraries, meeting rooms, archives or premises for associations.

In addition,more than 9,300 classrooms were deemed to be “in a dilapidated situation” and some schools lacked sanitation, water and electricity networks.

The Court’s report also shows a complete disregard for the recommendations of the education and training charterof the Ministry. The Court notes a large number of dysfunctions in boarding schools, which sometimes accommodate twice as many students as their actual capacity. Transport and restoration conditions, particularly for disadvantaged students, are considered “inappropriate.”

“Every middle school, which welcomes students from rural areas, must have a boarding school equipped with all the conditions of hygiene and well-being that require a studious schooling,” stressed the Court. In rural areas, however, the crippling lack of boarding schools, scholarships, cafeterias, study rooms, and more basic infrastructure is the main cause of school dropout.

For the Court of Audits, these dysfunctions are mainly due to poor planning and management. The lack of an integrated and reliable information system causes many issues since its does not provide timely and reliable data on the monitoring of the education system.

Another dooming factor is the failure of school planning. According to the Court of Audits, the Ministry of Education had no document recounting its prospective vision for the development of the education system and its integration into the economic and social fabric of the country.

Going through the 17 pages of the report, the repetition of terms such poor, insufficient, weak, deficient and insubstantial are more than enough to illustrate the current state of Moroccan schools. Mohammed Hassad, the current Minister of National Education, has his work cut out for him.