Rabat - The Moroccan and Angolan Ministers of Foreign Affairs met on Monday in Rabat, as part of Morocco’s push to improve relations with southern Africa. 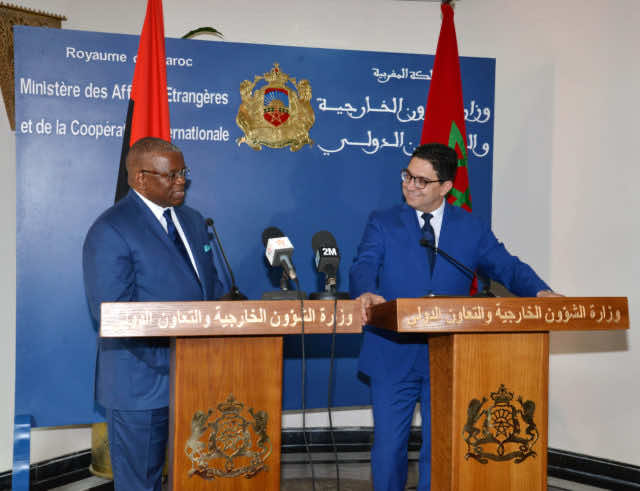 Rabat – The Moroccan and Angolan Ministers of Foreign Affairs met on Monday in Rabat, as part of Morocco’s push to improve relations with southern Africa.

The meeting between Nasser Bourita and his Angolan counterpart Georges Chikoti was the first time an Angolan chief diplomat has visited Morocco in 20 years.

During the meeting, the two countries signed a political consultation agreement, demonstrating Morocco’s push to improve its relations with the countries of southern Africa, long seen as fervent supporters of Polisario Front.

“This visit underlines [the Kingdom’s] will to start a new chapter in our bilateral relations. We want these relations to be strong,” said Bourita. “This visit is consistent with His Majesty’s directions that Morocco opens up to new regions in Africa, especially southern Africa.”

The region remains supportive of Polisario, with South Africa as the spearhead of this alignment. Other hard-core proponents of the separatist group also include Namibia and Zimbabwe.

But, as Morocco’s chief diplomat asserted, “no region is impregnable.” Bourita previously met with foreign ministers of Zambia, Lesotho and Swaziland in April and early June.

While Zambia had sent mixed messages in the past concerning its position vis-à-vis Polisario, approving Morocco’s reintegration into the African Union (AU) while continuing to recognize the separatist front, Lesotho Minister of Foreign Affairs Mgwagwa Gamedze declared that his country supports Morocco’s position on the issue of Western Sahara.

Moroccan diplomacy seems much more pragmatic than even before. Despite Monday’s agreement with Angola, it is too early to expect a complete shift from the southern African country’s longtime support for Polisario. However, Bourita affirmed that that consultation between the states will not be affected by their disagreement over that question.

“Morocco is extending its hand to African countries to exchange, explain [its position], and build a common future,” said the Kingdom’s chief diplomat.

Opening up to Southern Africa comes after a long and hardeffort byKing Mohammed VIand Moroccan diplomatic forcesto establish the countryas a major partner of African countries and corner Polisario diplomatically.

After several visits to West Africa in the last few years, the King went on an eastern African tour in October 2016 to seek fresh relationships with these countries.

In the end of January 2017 the Kingdom made a triumphant comeback to the African Unionafter a 33-year absence protesting of the admission of self-proclaimed Sahara Republic into the bloc in 1984.

In November 2016 Bourita said in an interview with French newspaper Le Monde that Moroccan diplomacy’s its African strategy has “come to maturity,” which explained why the Kingdom was confident of the impending success of its bid to rejoin the AU.

“Diplomacy is like agriculture. The fruit has to be picked at the right moment, not before, not after.”

Speaking about the King’s visits at the time to East Africa, Bourita explained that the tour was a normal step in Morocco’s African strategy. After 15 years of investment in West Africa, he suggested, the Kingdom grew to become a trustworthy partner and the top African investor in the region.

“We are at the beginning of a transit to a higher stage in our continental policy. Today eastern Africa, tomorrow it is going to be southern Africa.”