Rabat - Belgian police “neutralised” a 36-year old Moroccan man after he was suspected of detonating a bomb at Brussels Central Station on Tuesday night.

By
Chloe Koura
-
Chloé Koura is a final-year student of Arabic and Latin at the University of St Andrews.
Jun 21, 2017
Spread the love

Rabat – Belgian police “neutralised” a 36-year old Moroccan man after he was suspected of detonating a bomb at Brussels Central Station on Tuesday night.

The 36-year old, who has only been identified with his initials O.Z., has been revealed as a Moroccan coming from Molenbeek, an area in western Brussels noted for its links to extremism.

Belgian Prime Minister Charles Michel said a “terrorist attack had been averted” after the man approached a group of people at the station and tried to blow up his suitcase. Prosecutor Eric Van der Sypt said that part of the suitcase exploded and caught fire before it successfully blew up a second time.

O.Z. then ran towards a station-master and attempted to attack a soldier, shouting “Allahu Akbar”. The suspect was shot and later died from injuries.

Reports said that while he had not been connected to terrorism, he was known to police.

Belgian authorities searched his house in Molenbeek in the early of hours of Wednesday morning.

Molenbeek was home to the November 2015 Paris attackers, and a report by local police in early 2017 showed that 51 groups were suspected of ties to terrorism. 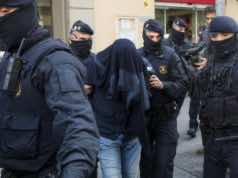 8 Moroccans Arrested in Barcelona with Possible Links to Brussels Attacks