Rabat - While his dismissal as head of government by King Mohammed VI back in March has since kept him away from limelight, last night Laylat al-Qadr “photo shoot” suggests Abdelilah Benkirane is still Morocco’s most popular politician. 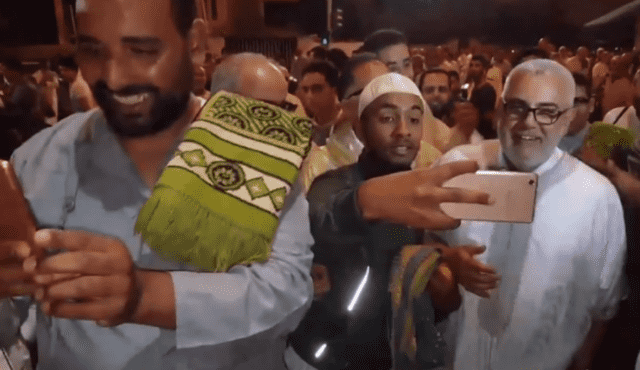 Rabat – While his dismissal as head of government by King Mohammed VI back in March has since kept him away from limelight, last night Laylat al-Qadr “photo shoot” suggests Abdelilah Benkirane is still Morocco’s most popular politician.

On Wednesday night the Islamist leader was greeted as a star by worshipers who gathered outside a mosque near his home where he went to pray the nightly Ramadan Tarawih prayer.

Dozens of “fans” surrounded the leader of the Justice and Development Party (PJD) to take selfies with him, indicating that the man who led his party to victories in general and municipal elections in 2011, 2015 and 2016 has not lost his appeal.

Rumors about his potential bid for a third mandate surfaced a couple of months ago, and the issue is still raising questions today.

Benkirane was elected in 2008 as PJD’s Secretary General when he defeated current Head of Government Saad Eddine El Othmani.

Benkirane’s charisma was a key factor for the party’s big win in the October 2016 elections, snatching 125 seats out of 395, an unprecedented result in the history of the country. Still, as he was lacking a clear majority, the PJD had to look for partners to form a coalition, which turned to be a difficult task. The party’s former ally, the National Rally of Independents (RNI), imposed the condition of including two other parties in the coalition before joining, which Benkirane refused.

As a consequence of the stalemate, El Othmani was chosen by King Mohammed VI to replace Benkirane after he failed to form a government throughout six months of unfruitful negotiations with other political parties.

Following his dismissal, the Islamist leader kept a low profile, avoiding media appearances. In May he went on a omra (minor pilgrimage) to Mecca “to take some rest.”

However, concessions made by El Othmani during his negotiations to form a coalition, such as including parties previously rejected by Benkirane, the government’s shaky management of the eight-month-long crisis in Al Hoceima, as well as El Othmani’s charisma-less personality, which stands in stark contrast with Benkirane’s, have all led members of the party to call on the former head of government to take a center stage and assume his responsibilities as a leader who enjoys “national respect.”

On Sunday Mohamed Khoiyi El Khamlichi, a PJD member of Parliament, posted an open letter to Benkirane on Facebook urging him to not retire from politics and to continue speaking on the country’s current issues.

“In these circumstances Abdelilah Benkirane assumes a historical responsibility, not only because he is the Secretary General of the leading party, but also because he is a national leader who enjoys the respect of a large base of Moroccan citizens which led to hundreds of thousands of Moroccan voters to go to the polls in two key elections to endorse his reforms,” wrote El Khamlichi.

The deputy invoked the sliding public approval of PJD and the worrying developments in the country as a reason for Benkirane to break his silence and resume his role as party leader so that PJD can assume its obligations towards society.

Still, Benkirane’s potential bid for a third mandate as the head of the Islamist party might be hindered by the refusal of some leading members under the justification of preserving “democracy” within the party.

Whether the Islamist party members choose to endorse Benkirane’s candidacy or collectively turn the page, the decision will affect the party’s future and provide clues on how much the post-2016 elections have made the party review its political choices.