“We should congratulate the students who succeeded at passing the baccalaureate tests as well as the parents, teachers and administrators,” he said in a speech at the opening of the government council.

Othmani also addressed the students who failed to succeed in the regular session of the baccalaureate exam, saying, that “your failure is not the end of the world, and to by God’s will you might be lucky in the second session.”

The head of the government added that the failure is normal, and that most of the ministers of his government have failed at a certain point. “Perhaps not all of them failed,” he clarified,“but I certainly have.” 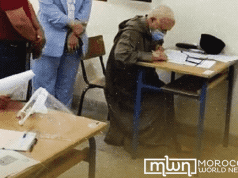